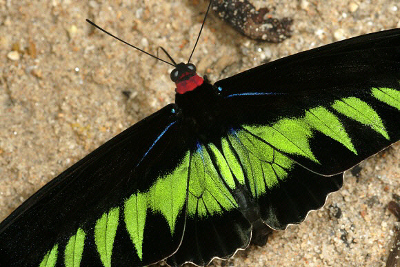 Rajah brooke's Birdwing butterfly is similar in looks to the Palawan Birdwing though males have a more greenish color in the rear wings. It’s wingspan extends up to 6 1/2 (17cm). The males have generally black dominating color on their wings with seven teeth shaped electric green marks. A large electric green patch on the hind wings completes the general look of the Rajah Brooke’s Birdwing’s wings. On the contrary, the female species have a browner color on their wings with flashes of white at the tips of its fore-wing. A similar trend in coloring is also prominent at the bases of the hind wings. The male Rajah brooke's Birdwing Butterfly have brighter markings than the females. Their head is bright red while their bodies are black with markings of red all over them. The Rajah brooke's Birdwing Butterfly different looks are an illustration of sexual dimorphism, which means that both males and females look different from one another.

The eggs, globular reddish, are laid on leaves of climbing vines of the Aristolochia (Aristolochia foveolata). The legs are laid one egg per leaf on the tips of the vines leaves. A fully-grown caterpillar is dark greyish brown with a light grey saddle mark on the back. Buff and grey tubercles cover the whole extent of the body. The larvae of the Rajah brooke's Birdwing Butterfly are voracious eaters but their movement is very slow. Once they defoliate a certain leaf, they move on to the other and sometimes starvation might lead to cannibalism. The caterpillars have an osmeterium behind the head that secretes a pungent fluid, which deters potential predators. The caterpillars are very unappealing and toxic due to their feeding habits. Caterpillars concentrate this aristolochic acid in their tissues up until they attain adulthood.

The pupa is apple green with violet markings. It is attached by the cremaster and silk girdle to the vine stem vertically. "Scientific name for butterfly Lepidoptera".