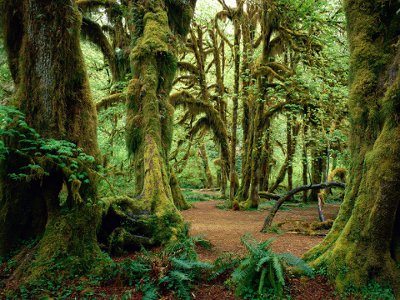 Attemps to discourage deforestation of the rainforest, mainly through maintainable-logging initiatives, are underway on a very limited basis but have had a negligible impact so far.

The rainforest is nearly self-watering. Plants release water into the atmosphere through a process called transpiration. In the tropics, each canopy tree can release about 760 liters (200 gallons) of water each and every year. The moisture helps create the thick cloud cover that hangs over most rain forests. Even when not raining, these clouds keep the rainforest humid and warm.

Plants grow very close together in the rain forest, and contend with the insect for space and food. Researchers have found many types of medicines in the rain forest. Bioprospecting, or going into the rainforest in search of plants that can be used in cosmetics, medicines and foods has become big business during the past decade, and the amount that native communities are compensated for this varies from a share in the profits to nothing.

The National Cancer Institute (NCI) estimates that 70 percent of the anti-cancer plants identified so far are rain forest plants. Under development by a private pharmaceutical company, possibly for treating HIV, is Calanolide A, which is derived from a tree discovered on Borneo, according to NCI for a new drug.

Many trees and plants, like orchids, have been removed from the rain forest and cultivated. Brazil nut trees are one valuable tree that refuses to grow anywhere but in undisturbed sections of the Amazon rain forest. There, it is pollinated by bees that also visit orchids, and its seeds are spread by the agouti, a small tree mammal.
30 percent of the remaining tropical rain forest on earth is in brazil, more than 50,000 square miles of rainforest were lost to deforestation between 2000 and 2005. Biologists worry about the long-term consequences. Drought may be one. Some rain forests, including the Amazon, began experiencing drought in the 1990s, possibly due to deforestation and global warming.
As many as 30 million species of plants and animals live in tropical rainforests. At least two-thirds of the world's plant species, including many exotic and beautiful flowers grow in the rainforests.
the world's rainforests are home to 50 percent of the Earth's plants and animals, covering less than 2 percent of the Earth's total surface area.
Rainforests can be found all over the world from Canada to as far north as Alaska to Latin America, Asia and Africa.
Rainforests are found on every continent across the Earth, except Antarctica.
There are two major types of rainforest: temperate rainforests and tropical rainforests.
The largest temperate rainforests are found on North America's Pacific Coast and stretch from Northern California up into Canada.
Temperate rainforests used to exist on almost every continent in the world, but today only 50 percent — 75 million acres — of these forests remain worldwide.

Search the Web for More information on Rainforest at LookSeek.com Search