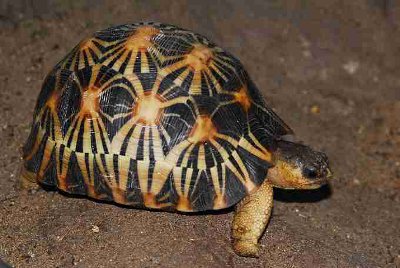 An adult Radiated Tortoise is capable of growing to a maximum carapace length of 16 inches (40 cm) and has a maximum body weight of 35 pounds (15.8 kg). The Radiated Tortoise has the essential body shape that is made up of elevated-domed carapace, a rounded head, and elephantine feet. The color of its head, legs and feet is yellow apart from an erratic sized black-colored patch on top of its head.

The Radiated Tortoise is an herbivorous reptile, and they are recognized to graze regularly in the similar area, thus keeping the plants in that region closely trimmed. The Radiated Tortoise usually prefer new development rather than mature development due to the low-fiber, high-protein content. However, these tortoises are endangered, mostly due to the obliteration of their home by humans and owing to poaching.

The Radiated Tortoise is an herbivorous reptile, and their regular diet comprises 90% of grazing. They also feed on succulent plants and fruits. However, their favorite food is the Opuntia cacti in the wild.

The gestation period is fairly long in this tortoise variety, usually lasting between 5 and 8 months. Juvenile tortoises will bear the body length that ranges from 1.25 inches to 1.6 inches (3.2 to 4cm)after hatching. They have a white to an off-white shade body color, and they get the elevated-domed carapace quickly subsequent to hatching.

The average lifespan of the Radiated Tortoise in the wild ranges from 40 years to 50 years, whereas in the captive, they live up to 100 years.

Search the Web for More information on Radiated Tortoise at LookSeek.com Search