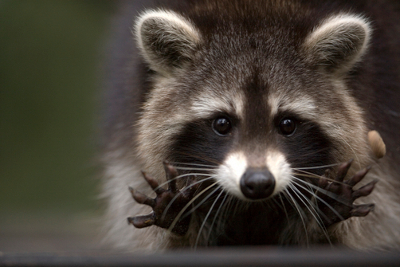 Facts about Raccoons "Scientific name for Raccoon is Procyon lotor". The "Raccoon" is also commonly known as the common raccoon, northern raccoon, coon (colloquially) or North American raccoon. It is native to North America and it is medium sized; the Raccoon belongs to the procyonid family and it is the largest mammal in this family. The raccoon is 15.75 inches to 27.5 inches (40 to 70 cm) in length and it weighs 8 to 20 lbs(3.5 to 9 kg). The species has a grayish coat in color and has a thick underfur that protects it during the cold weather.

The raccoons have two distinctive features and these are:

Their facial mask and their extremely dexterous frontal paws

The Raccoon is a very intelligent mammal that is able to remember solutions to tasks for a period of up to 3 years. The Raccoon species is omnivorous and nocturnal in nature. It mainly feeds on invertebrates, vertebrates and plants.

Originally the raccoon used to inhabit deciduous as well as mixed forest. However, the mammal is highly adaptable and as such it has habitats in coastal marshes, urban areas and mountainous areas. Indeed some homeowners consider raccoons as pets. Due to escapes and intentional introductions in the middle of the twentieth century; today raccoons are found in the European mainland, Japan and even regions of Caucasus.

The Raccoons were previously considered solitary. However, today there is evidence that they take part in some kind of social behavior that is gender specific. Female Raccoons that are related have a common area that is shared among them while male Raccoons that are not related form groups of four animals and amicably live together. The groups are meant to protect one another against foreign invaders especially during the mating seasons.

The Raccoon gestation period is about 65 days whereby the female raccoon gives birth to two to five kits in spring. The mother then brings up the kits until late fall when they are ready for dispersal. The early years of the young a raccoon is spent on tree holes above the ground and after about two months they come down to the ground where the cubs familiarize themselves with self exploration.

Hunting and and Vehicular injury

If a raccoon is well adapted it will eat anything from fish, insects, human trash, mice and stolen eggs. Once in a while the raccoon washes its food by dunking it in water rapidly before consuming it. This opportunistic feeder will go to all lengths when it comes to its food and it is known to eat even from bins.

The Raccoon can live in holes, fallen hogs and house attics. During spring and summer raccoons found in the northern areas gorge themselves to store up as much body fat as possible. They then sleep in their den through most of winter. Besides the North American raccoon six other raccoon species are in existence. Most of these other species inhabit the tropical islands.

Search the Web for More information on Raccoon at LookSeek.com Search