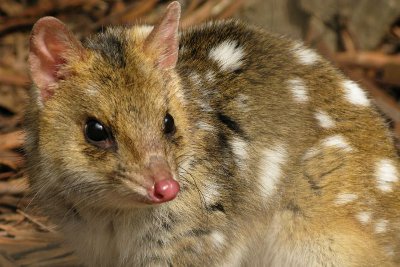 Facts about Quolls. "Scientific name for Quollis Dasyurus Viverrinus". Quolls are carnivorous marsupial which are mainly found in Australia, New Guinea and Tasmania. Coming from a group of six species quolls have evolved for around fifteen million years ago in Miocene and the ancestors are believed to have diverged by around four million ago. These six species are; northern, tiger, eastern, southern, bronze and New Guinean quolls.

The Females Quoll have six nipples and during the breeding seasons they develop a pouch. It opens towards the tail when they are young. The only exception is the tiger quolls which has a real pouch. Quolls reach maturity when they are one year old.

The Quoll normally stay alone but come together for mating purposes. The mating occurs during winter season and the gestation period lasts for 21 days. When the Quoll pups are born they are the size of grain rice. The female gives birth to around 18 puppies but unfortunately only six survive and suckle the mother in order to grow. The Quoll that survive stay in their mothers pouch for eight weeks and after that they get to their mothers back where they stay for six more weeks.

Quolls eat small birds, mammals like rabbits, lizards and insects. The natural lifespan of quolls is between two to five years. Though all the six species have declined in numbers, the eastern quolls have become completely extinct in Australian mainland. They are only found in Tasmania.

Search the Web for More information on Quoll at LookSeek.com Search