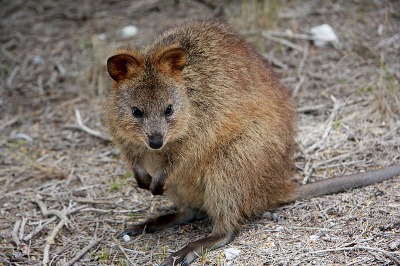 Facts about Quokka, "Scientific name for Quokka is Setonix brachyurus". When the gossip is on the Quokka cute, little animal, there is no comparison to this cheeky creature that might make you feel like it’s just out of a kid’s feel-good movie.

The Quokka, a marsupial (belongs to macropod family to which kangaroos and wallabies belong as well) is known to be the world’s happiest animal due to its appearance, behaviour and it’s cute smile while it sleeps. Quokka is found along with Gilbert’s potoroo in the small islands in the western coastal Australia and about the size of a domestic cat.

The Quokka Weigh between 5.5 to 11 pounds to (2.5 to 5 kg), these fun loving animals has a very small tail having a stocky build. The Quokka almost look like tiny kangaroos. They are herbivorous and can climb trees and shrubs. Their body is covered with grizzled brown fur.

The Quokka are not afraid of humans; rather they show a very friendly approach to humans. However the govt has put ban on any kind of treatment to the Quokkas including feeding them. Any kind of violation of the ban can lead up to a fine of $2000.

The Quokka were once plentiful in population and their friendliness is expected to be the reason behind the abrupt decrease in their number.

The Quokka exist in the wild and prefer to stay in groups in semi-arid to cultivated fields. Their places of occurrence are usually free of foxes and cats.

The Quokka loves to roam in the wild, sniffing several herbs and shrubs, eating new born shrubs and leaves. Quokka is currently enlisted as a “vulnerable” animal by the IUCN. The organisation has added its name to the Red Data Book under the Threatened Species List.

The conservation efforts and fox control programmes by the government is given credit for existence of such a beautiful nature loving creature in this small number. After years of effort, the Quokka population seems to be restoring in certain areas.

Search the Web for More information on Quokka at LookSeek.com Search