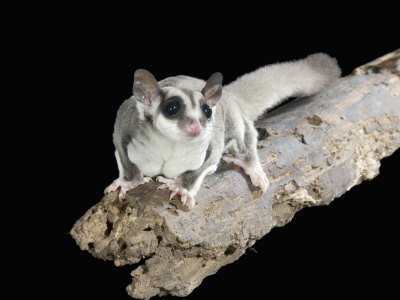 Facts about Pygmy Possum. Scientific name for Pygmy Possum is Gymnobelideus leadbeateri". The pygmy possum is further divided between the little pygmy possum, and the eastern pygmy possum. They have distinct special adaptation traits that help them to cope with their natural habitats. They are small in size and in comparison to its body volume it means that it has a lot of skin which aides in cooling of the body temperatures, in simple terms it has a higher surface area to volume ratio. The Pygmy Possum can also lower their metabolism, this is known as Torpor. Their body temperature can get to as low as its surroundings. The little pygmy possum reaches up to (seven grams) with a head and body length of a mere 2 3/8 inches (6 cm)and a tail of 2 29/32 (7.5 cm). The Pygmy Possum is the smallest of all possums.

Distribution and habitat of Pygmy Possum

Little pygmy possums was once common in Tasmania, however, they can also be found on the mallee scrublands and the Kangaroo Island. They can occur in a range of habitats except for the rainforest. They are most common in the drier forests. While the eastern pygmy possum are found in the wetter forests of the western half of the state.

The eastern pygmy possum, unlike its relative it was thought to be primarily an insectivorous animal. In fact it is a pollen and nectar feeder. They can also feed on invertebrates.

The little pygmy possum mostly feeds on lizards and insects.

Their breeding character is somehow same in both species. It happens in between late winter and spring. They give birth to around four litters per birth. The litter will occupy the pouch for around 6 - 7 weeks.

The ability to enter Torpor makes them able to withstand harsh conditions. Torpor is a state not same as true hibernation, it will only last a few days at a period, and then come out to feed then continue in the same state.

Search the Web for More information on Pygmy Possum at LookSeek.com Search