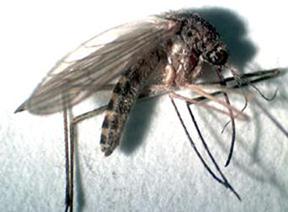 The Psorophora Mosquito mainly feed on mammalian blood. It often travels long distances in search of blood meals. According to Howard et al. 1917, the Psorophora are one of the few mosquitoes whose predacious larvae are known for preying on other mosquito larvae and aquatic invertebrates. Unlike the Toxorhynchites larvae, which are ambush predators, Psorophora Mosquito larva is a rather active predator, known to chase its prey and are able to bite even through heavy clothing such as cotton canvas shorts. The bite of the Psorophora Mosquito is like a stab and is much worse than a regular mosquito bite. Adults also feed on blood from ruminants, raccoons, armadillos, and rabbits as well as nectar. The larvae’s cannibalistic trait has also been demonstrated as it has been spotted feeding on tadpoles (Breeland et al. 1961).

Breeding by the Psorophora Mosquito takes place in temporary flood-waters, such as roadside ditches and woodland pools, and have a wide distribution across the world. Breeding can also take place in low-lying areas with an overgrowth of pasture and damp soil, which often flood following a dry season. Psorophora Mosquito are active from dusk, but can also bite during daytime in shady areas. The female Psorophora Mosquito lay eggs on either dry or damp soil in wooded plains and fields where they stay for months or even years and hatch when inundated by rain or flood-waters.

The most distinct feature that clearly distinguishes Psorophora (sore-offer-ah) from other mosquito species is their long, hairy (or "shaggy" legs). The Psorophora Mosquito are generally large mosquitoes featuring a wingspan of 6-9 mm. Both adult Psorophora Mosquito males and females are yellowish-brown in color with yellow proboscis and black tips. The thorax is dark-brown with a thin golden yellow stripe and two dark stripes through the middle. The abdomen consists of ten segments and is pale in color. Unlike the female adult Psorophora Mosquito, the males have bushy antennae, which are less than half as long as the head.

In Florida, scientists and entomologists have associated the Psorophora Mosquitos with any common diseases – taking them as vectors to arboviruses, Ilheus virus, Eastern Equine Encephalitis and Venezuelan equine encephalitis virus. The females, particularly, are persistent biters who often venomously attack any time when their haunts are invaded. The Psorophora Mosquito adult females have a pestiferous nature that considerably limits any potential benefit that can be achieved from using the mosquito as a biological control agent (Mercer et al. 2005).

Psorophora Mosquito can drink blood up to three times its weight. It would take over a million bites to drain all the blood out of your body.

Female Psorophora Mosquitos can lay over 250 eggs at one time ever 3 days, for every milligram of human blood, the Psorophora Mosquito can lay an average of about 40 eggs. Hatching eggs will hatch into larvae in about 24 to 48 hours. Larvae soon grow to about (5 mm) in length. The eggs are deposited most of the time in clusters called "rafts", on the surface of flooded areas and stagnant water as little as one inch. The female Psorophora Mosquito will lay eggs about three times before they die.

The Psorophora Mosquito spends their first 10 days in water, which is mandatory for the eggs to hatch into larvae, named wigglers. The stagnant water is where the wigglers feed on organic matter and breath oxygen from the surface. Than they develop into pupae, which do not need to feed and are partly encased in cocoons. In a few days, the pupae will change into a full grown Psorophora Mosquito.

Only a female Psorophora Mosquito will bite a human. Both female and male Mosquito feed mainly on plant nectar and fruit, the female needs the protein in blood to help the female to develop their eggs. There is a couple of resting days before the female Psorophora Mosquito will lay the eggs. Most of the Mosquitoes are crepuscular- meaning appearing or active in twilight or dawn.
The word Mosquito is Spanish for "little fly". The word Mosquito its known origin is from the early 16th century. Mosquitoes in Africa are named "Mozzies". "Scientific name for Masquito is Culicidae".

Search the Web for More information on Psorophora Mosquito at LookSeek.com Search