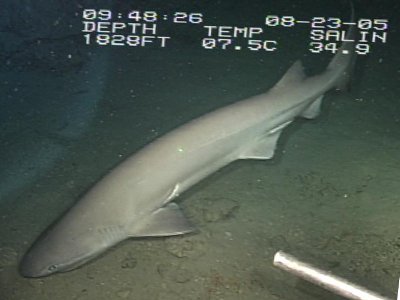 Prickly Dogfish Shark is a member of Oxynotus genus which is among the family of Angular Rough Sharks. It has a very chubby, curious and an appearance that look like a cartoon. This distinguishes it from other sharks.

Prickly Dogfish Shark has an almost triangular body which has a hump and compressed. It is brownish gray in color and either side of the belly has lateral keel. The dorsal fins are floppy and fleshy. Each dorsal fin of the Prickly Dogfish Shark has a sharp spine in front. The skin is very rough and feels like a sand paper. This is because it has scales that are referred to as dermal denticles. Prickly Dogfish Shark has a mouth with fleshy lips and the teeth have a shape of spear in the upper jaw while the lower jaw they look like a blade. Its length in adulthood is 23 1/2 inches (60 cm) for males and 28 inches (72 cm) for females

Prickly dogfish shark has a luminous eyes or mucus that it uses to attract its prey. But due to it hump shape it is believed to have a lot of energy while swimming and that how it manages to stay deep into the ocean.

Not much is known about the Prickly Dogfish Shark biology especially the feeding behavior but it is suspected to feed on fish and invertebrates.

Just like other sharks the Prickly Dogfish Shark has an ovoviviparous breeding system meaning the eggs grow in the mother’s body. It has a very low productivity but it carries 7 to 8 embryos at a time. The embryos are divided into the right and left uterus. They are 9 1/2 inches (24 cm) long at birth.

Search the Web for More information on Prickly Dogfish Shark at LookSeek.com Search