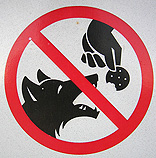 Animals are very beautiful to watch, play around with and even feed. Watching the squirrel beautifully run up to you and into your hands as they reach out for the snacks on your fingers can be very exciting. But is it really right to feed animals on human food? Does the deer really require human snacks?

The answer to this question is NO. We should not feed the wildlife on human snacks when we go camping, hiking and having fun in the wilderness. It is important that you learn the truth about animal feeding and help preserve the wilderness as much as possible.

For starters the wildlife is meant to eat specific kinds of food that are nutritious and healthy for them. The human food that we sometimes give these animals are not well balanced and so if they get used to eating this food they stop loving their own food and they slowly sink into illnesses as a result of eating unbalanced diet. You see for these animals to benefit from the food they eat and for them to remain healthy, they need to get the right kind of diet available to them in the wilderness.

Feeding the wildlife on human food like popcorn, bread or crackers along with other human food is believed to cause “angel wing” a deformity that affects geese, ducks, swans as well as any other waterfowl that feed on human food.

If you must feed these birds you are advised to look for foods that are beneficial to them from animal feed stores. Here are some foods that are healthy to these birds; pellets, grains such as barley, wheat and oats, seedless grapes, well shredded kale etc Ensure to give them only bite sized foods to prevent choking.

The next thing to bear in mind is that when animals get used to eating the food that we feed them on, they become lazy and dependent on us to feed them. The thing is that these animals are structured to search for their own food and that dependency on human diet only makes them unhealthy and eventually sick.

It is potentially dangerous to feed animals on or near vehicles as accidents may arise not only affecting the animals but people and property as well. Moving vehicles can hit animals, children and in serious cases animals may break into vehicles in search of food. A case in point is the 1998 incident where animals caused a damage of about $630,000 in Yosemite National Park when they broke into over 1000 vehicles.

Diseases from animals that are dependent on human foods are not uncommon. The same can be said of injuries. When animals gather for food handouts from human beings, it is possible that they will crowd and compete for the available food. As a result, fighting may occur and people as well animals may get injured. In this process diseases may also spread to humans and pets.

It is not entirely unhealthy to feed animals but caution must be taken if preserving the wildlife is to be kept priority.

Search the Web for More information on Preserving the wildlife-to feed or not to feed the wildlife on human foods at LookSeek.com Search