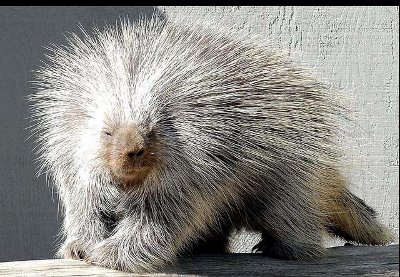 Facts about Porcupine, "Scientific name for Porcupine is Hystricomorph hystricidae". The name "Porcupine" in Latin means quill pig. Porcupines can be divided into New World porcupines (of North and South America) and Old World porcupines (of Asia and Europe). There are two dozen known species, all with the distinctive quills.

Porcupines are vegetarian rodents. Porcupines are related to mice and rats. The Porcupines are up to 20 inches long (50.8 centimeters), not including the tale. They weigh anywhere from 20 to 30 pounds (4.5 to 13.6 kg).

Porcupines are nocturnal. They come out at night to eat leaves, grass, flowers and fruit if they can get it. In the winter, they will eat evergreen needles and tree bark. Porcupines can swim, so they will eat water lilies and water plants. Their hollow quills help them to float. They will eat woody shrubs. Porcupines gnaw on wooden items to sharpen their teeth but do not eat real wood.

Porcupines are best known for their quills. The porcupine cannot shoot its quills like weapons. However, when it takes a defensive position and its quills stand up as a protective barrier, their connections to the skin loosen such that they readily come out. The porcupine’s defensive position is to put its head and shoulders down, lift up its back toward the threat to make the quills come out and start thrashing its tail. The longest quills are on the Porcupines rears, the shortest ones on their faces. The quills are scattered among their brown and black hairs, since the quills are actually modified hairs. The quills not only come out of the porcupine’s body easily, but its tip is designed to burrow into a predator’s skin. Its barbed end also makes them hard to remove. The quills of the African crested porcupine are a foot long. For other species, they are several inches long. Predators want to flip porcupines over because they lack quills on their stomachs.

Defensive quills aren’t enough to prevent predation. Porcupines are eaten by coyotes, bobcats, lions, wolves, great horned owls and anything else that can eat them. Fishers are good at catching porcupines.

Porcupines live in dens, though they prefer to move into existing hollows like hollow logs, rock crevasses and even spaces under a deck. New World porcupines are good tree climbers, and they readily eat woody foods like bark and woody plant stems. They will even gnaw on wood with salty residue like gardening implements with a salty residue left by human sweat. New World porcupines tend to live in forests but can survive in scrublands. Old World porcupines live in grasslands, forests and even deserts. These are ground dwelling species. Old World porcupine quills have white and black bands on them. They can lift their quills in a crest for shows of force or defense.

Porcupines mate in the early fall or late summer. Porcupines become vocal during mating season. Their calls include coughs, grunts, moans, shrieks and tooth clicking. Males will spray urine on a female’s face to mark her.
Female porcupines have one to four young at a time. They have soft quills at birth that harden by the time they leave the mother at two months of age.

Search the Web for More information on Porcupine at LookSeek.com Search