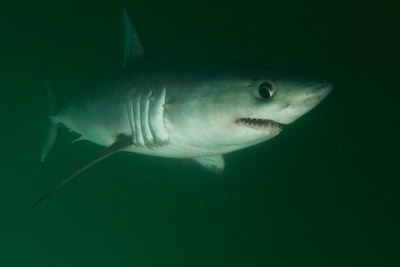 The porbeagle shark is endowed with two keels on its tail along with a body that is torpedo-shaped which makes it very efficient in swimming. The Porbeagle Shark species cannot survive without swimming since swimming is the only way it gets oxygen.

The porbeagle shark is warm blooded. It keeps the body warm by recycling the heat that is generated by its muscles. This way the Porbeagle Shark can survive in the cold waters without being cold.

The Porbeagle Shark species weighs about 350 to 550 pounds which is equivalent to 160 to 250 kilograms.

You will find these sharks in the south pacific and the north and south Atlantic oceans. They can survive in cold waters as deep as 1215 feet (370 meters). The Porbeagle Shark is endowed with long sharp teeth that it uses to eat its prey which consists of squid, mackerel, cod, flounder, and hake along with other types of bony fish.

The porbeagle shark engages in mating between September and November. There are two main mating grounds known for this species; one is on the Georges Bank in the Gulf of Maine and the other is off Newfoundland. These mating sites are mainly used by the western north Atlantic porgeable sharks.

During mating the male Porbeagle Shark is known to bite the female’s pectoral fins, the gill region and flanks for purposes of support during copulation. Some female Porbeagle Sharks have been spotted to have marks late in January, meaning that the mating season is not only reserved for September and November.

An adult female Porbeagle Shark is blessed with two uteruses and one functional ovary found on the right. It is probable that Porbeagle Sharks reproduce every year. The female has a litter of four with two embryos that are opposite each other. The Porbeagle Shark has a gestation period of between eight to nine months.

Search the Web for More information on Porbeagle Shark at LookSeek.com Search