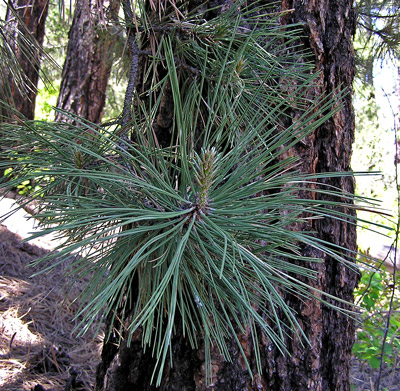 Pinus ponderosa, commonly known by many as blackjack vine, bull pine or ponderosa pine is a large pine tree whose origin can be traced from different regions especially Canada and united states. It also grows in various parts of British Columbia especially the southern part and towards the east of 16 western states. Also, tree has been introduced in temperate parts of Europe.

The tree was first identified in 1826 in Spokane which by that time was referred to as eastern Washington. At that moment, David Douglas named it pinus resinosa. Three years later, Douglas confirmed that he had new specimens which he gave them the current name Pinus Ponderosa because of its heavy wood. In 1836, Charles Lawson who was a Scottish nursery man named and described it in full.

This is a large coniferous evergreen tree. A mature species have orange-red barks with black crevices while Younger species have blackish brown barks. Pendorosa’s pine has five races that can be easily distinguished by their unique characteristics. The pacific race is the longest and measures approximately 7.8 inches and has flexible needles in plume-like fascicles of three.

The Size Of The Trees

Pine ponderosa is grown in parks and large gardens as an ornamental plant. However, the trees also grow in natural forests. The tree thrives well in areas that are 2800M above sea level.

The tree has been used for:

· The sap is also used as glue