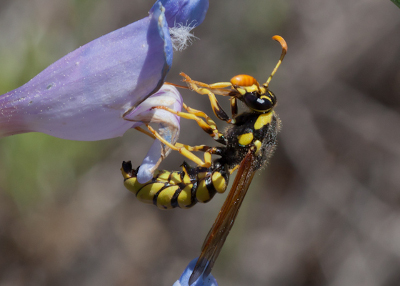 There are some species such as pseudomasaris that are found in California. The Pollen Wasp looks more like yellow buckets but have clubbed antennae that make them distinctive. The male Pollen Wasp antennae are elongated than that of the females.

Pollen and crops are carried to the nest as they continue to provision the cells. In fact they partition their cells using pollen and nectar. After that, the Pollen Wasp lay their eggs and then cover up the nests. Unlike other wasps that feed their larvae with caterpillars, pollen wasps feed theirs with pollen and nectar.

The Pollen Wasp mostly get their nectar from flowers. The Pollen Wasp have a tendency of visiting certain flowers for this purpose. The females are most commonly seen in June, though males emerge later in the year. The Pollen Wasp tend to visit the flowers that females have already visited.

Pollen Wasps are considered to have the same size like the yellow jacket wasps. That means they range between (0.25 to 1 mm) in length. But pollen wasps do not have longitudinal folds that most wasps portray while they are resting. The Pollen Wasp also have clubbed antennae that others don’t have.

Apart from these identifying factors, collecting of pollen and nectar is a common factor mostly seen in bees. This is why most people confuse them with bees. What is more confusing about Pollen Wasps is how they carry the pollen. Unlike bees that have pollen baskets on their hind legs, the Pollen Wasp have wasps waist that are slender than that of bees.

Most wasps don’t pollinate and the Pollen Wasps are not self pollinators. They only carry the pollen and take it to their nests.

Gardeners don’t like Pollen Wasps since they destroy flowers as they look for nectar. The Pollen Wasp also destroy ripen fruits and so in many instances they are eliminated.

The Pollen Wasp sting when disturbed and their stingers stay lodged in their bodies. The Pollen Wasp are not considered to be aggressive and this is evidence by the fact that they rarely sting. But if they sting, it is a painful one.

Search the Web for More information on Pollen Wasp at LookSeek.com Search