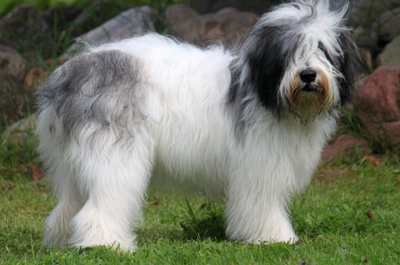 The Polish Lowland Sheepdog is a shaggy medium-sized working dog with a fairly broad leveled back. The average height of the Polish Lowland Sheepdog is 16 to 20 inches (40.6 to 50.8 cm). The average weight is 30 to 36 pounds (13.6 to 16.3 kg). It has a well masculine body with broad thighs and lions. Its head is slightly dome-shaped and broad. The dog heart-shaped ears are set moderately above the head.

A Polish Lowland Sheepdog’s mouth can apply approximately 150 to 200 pounds of pressure per square inch and an American Pit Bull Terrier, German Shepherd Dog and a rottweiler can have 320 LBS of pressure on avg.

A Polish Lowland Sheepdogs can hear a sound at four times the distance of a human. Sound frequency is measured in Hertz (Hz) Def-Hertz is the measurement of frequency, explicitly it's one cycle per second. The higher the Hertz are, the higher the pitched the sound is. Dogs hear best at 45,000 Hz to 65,000 Hz, while humans hear best at around 20 Hz to 20,000 Hz.

Search the Web for More information on Polish Lowland Sheepdog at LookSeek.com Search