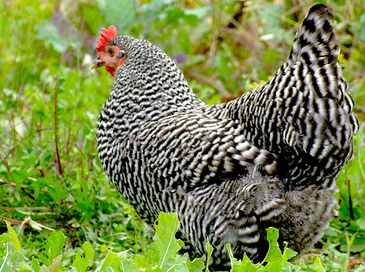 Plymouth Rock was used as one of the selected breeds that gave birth to the broiler industry movement in the 1920’s. The white Plymouth Rock is still being used in the female side of the commercial crosses.

Despite having a strong genetic instinct, the Plymouth Rock Chicken is considered as a good farm chicken. They are quiet and are easily controlled. They show immense broodiness and has a long and wide body. The breast also appears full and moderately deep. It has a moderate sized single comb. The varieties can be of barred, white, buff, partridge, silvery, blue and Columbian. Some strains are excellent lays while some are raised only for their meat.

Search the Web for More information on Plymouth Rock Chicken at LookSeek.com Search