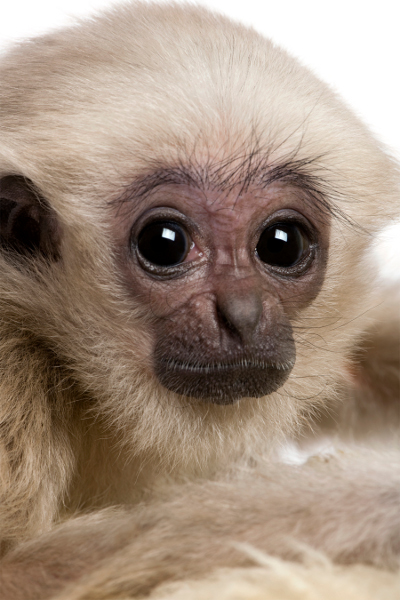 The male and female Pileated Gibbon Apes look different. Males are black, with white chest, hands, feet and face. Females are blond/white/grey colored with a black head and a black chest. Both males and females have a tufted crown, usually white, around their heads. All young Pileated Gibbon Apes are born a buff color, they develop dark spots on their head and chest at about one year of age, which develop and grow as they get older. Under the Pileated Gibbon Apes fur, the skin starts off a pale pink color and gradually darkens as they get older, reaching charcoal grey/black by the time they reach maturity. As apes, Pileated Gibbons have no tail. They have a slender torso and long arms. They are usually between 40 and 65 cm (15.7 to 25.5 inches) tall and weigh between four and eight kilograms (8.8 to 17.6 lbs).

The Pileated Gibbon Apes are diurnal, sleeping all night and active during the day. They spend well over sixteen hours of each day sleeping or resting. They also spend time playing, eating, calling, travelling and engaging in social grooming. The Pileated Gibbon Ape are very territorial, signaling their territories with loud duet vocalizations called singing. They tend to select sleeping trees in the central area of their territory, though rarely choosing the same tree more than once, and certainly not spending two nights in a row in the same tree. The Pileated Gibbon Ape spend most of their time in the mid or upper canopy of the trees. They travel by swinging (brachiating) from branch to branch with their long arms. This is a fast method of movement, and they can even swing/jump for as much as nine meters between trees. When they do come to the ground, they are bipedal, walking with their arms extended over their heads for balance.

Pileated Gibbon Apes mostly eat fruits which they find in the trees, but they do also eat insects, leaves and flowers.

Male and female Pileated Gibbon Apes form monogamous pairings. They breed at any time of year and raise their young together. Usually a single baby will be born each year, which will be weaned between the ages of one and two. Up until that point it will stay with its mother most of the time. Once the Pileated Gibbon baby Ape is weaned, the baby will remain with the family group until it reaches sexual maturity between the age of five and nine years old. At this point, the parents will become aggressive to the youngster to force it to leave the family group and territory. The Pileated Gibbon Apes have a natural life span of up to about forty years.

Pileated Gibbon Apes are endangered. There are two chief threats to their numbers. The first is constant deforestation of their habitat for fuel wood and farmland. The second is the wild meat trade, and the exotic pet trade.

Search the Web for More information on Pileated Gibbon Ape at LookSeek.com Search