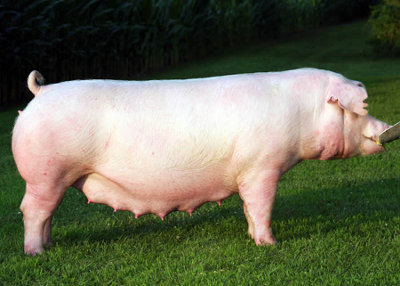 The scientific name for Pig (Sus scrofa), the wild swine (Boar) from the old world with a narrow body and prominent tusks is from where most domestic swine come from and introduced in the United States and bred to what we have as today's pig. The "fear of pigs Swinophobia".

In the world there is about 2 billion pigs. Pigs are very intelligent, not like everybody thinks, that they are dumb animals. Pigs are omnivores like humans, an omnivores, (definition-they eat both other animals and plants). The pig’s snout is its most important tool for finding food. The pigs snout is used for their excellent sense of smell but have poor eye sight.

Pigs are raised for there meat such as ham, sausage, bacon and pork chops. Pigs can make great pets. A wild pig is called a (boar) that lives in the wild and can be hunted. Feral pigs (means wild) can be a very big danger where humans habitat. Pigs can carry a variety of diseases and can pass them to humans. Pigs have small lungs compared to their body size.

Swine: is any variety of omnivorous, even-toed ungulates of the family Suidae, this includes hogs, boars and pigs having a short neck, thick skin a movable snout and a stout body. Pigs unlike is said, happen to be very clean animals. Pigs make sure their bathroom area is far away from where they eat Lie down, rest even piglets (baby pigs) will find a place to go to the bathroom, far away from their nest.

The four feet of the pig are called "trotters" that humans eat as a delicacy called pigs feet or pigs knuckles. A pigs foot has four toes that are pointed downwards when the pig walks it walks on the tips of its toes, rather than its whole foot and only uses two of the toes and the outside toes for balance. The pig has tougher feet at the ends are hooves. The two toes in the middle of the foot are slightly webbed helps the pigs balance for walking.

Pigs have 44 teeth when full grown, when they are baby pigs (piglets) the have 28 teeth which will fall at when they are 12 months old. Just like human teeth, the pig has an enamel coating that makes the pigs teeth stronger and helps it curb disease. Pigs chew their food because pigs have a digestive system similar to a human digestive system and cannot digest food that is not chewed.

The saliva of pigs contains pheromones-( A chemical substance used to attract a mate) similar to that of other pig breeds that communicate their sexual wants. The male pigs discharge this steroid and female pigs will go to vast lengths to acquire a smell of the sent.

A Pig can drink between 10 to 14 gallons (37.8 to 53 liters)of water in a day. The Mini Maialino is the smallest breed of pig. Truffle Mushroom hunters in France and Italy use pigs to hunt Truffle Mushrooms because of there keen sense of smell, the problem is that, sometimes if the hunter doesn't grab the mushrooms in time, the pig will eat it. Sometimes certain dogs are used instead of pigs.

A domestic farm pig averages 6 to 10 baby piglets in a litter and will have two to three litters per year. The sows nurse their piglets for about three to five weeks. When Piglets are weaned off of their mother’s milk, they are not called piglets but are known as shoats. Piglets at birth weigh about 2.5 pounds (1.1 kilograms), and on average, will double their weight in one week.

Pigs do not sweat a lot, that's why they cover themselves in the mud to keep their bodies cool. The expression "sweating like a pig" comes from a reference to pig iron, which comes form iron smelting.

Search the Web for More information on Pig Facts at LookSeek.com Search