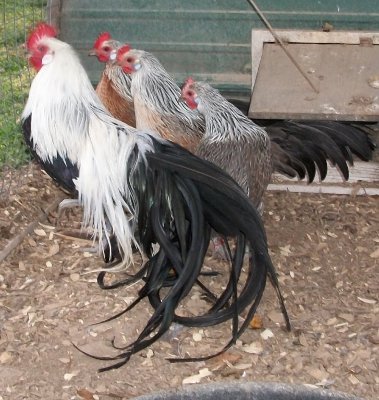 Facts about Phoenix chickens. The Phoenix chicken is a breed of chicken that originated from Germany, it is characterized with a long tail. The Phoenix chicken breed is derived from crossing the imported Japanese birds similar to Onagadori, the breeds included Leghorn, Modern Game, Yokohama, Ramelsloher, Old English Game, Malay, Combattant de Bruges.

Phoenix chicken are quite a high-maintenance breed, they require special care so as to keep their lengthy tail feathers in excellent shape.

The Phoenix is a chicken breed that is quite similar in appearance as the Japanese Onagadori, the difference is on place of origin and though the Phoenix tail feather is quite long but they are not as long as the Onagadori.

Sometimes the two breeds can get confusing if you can’t really tell the difference. The Phoenix cock has a compact body shape, and somehow short legs that are naked from feathers and are darkish in color. There are two standard variety of the Phoenix chicken; the Golden and the Silver. They both do have a standard plumage, on top of its head sits a single five-pointed comb that is medium-sized in the males and quite small in females and is red in color. On its small body there sits atop light – to darkish blue shanks. The earlobes are white and the wattles are red.

Caring and Handling of Phoenix chicken

As stated earlier the handling of Phoenix chicken is quite overwhelming. The breed requires a lot of attention, and a very patient handler. At some point it is a good consideration to handle the Phoenix chicken breed in a large dry coops with a number of high perches so that the lengthy tail feather can have space to extend.

Phoenix chicken requires high-protein diet so as to compensate for extra plumage. Though it is not known to be particularly friendly, they are a docile breed and it helps when giving it the attention it requires. The Phoenix chicken breed also prefers if it has plenty of room to roam freely.
Phoenix chicken hens go broody though they aren’t good sitters, they do have good maternal qualities.

Search the Web for More information on Phoenix Chicken at LookSeek.com Search