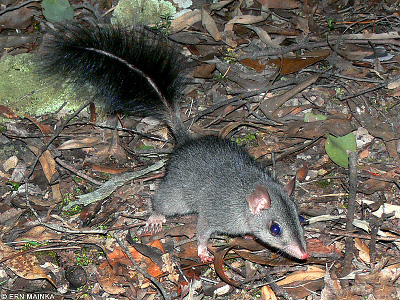 Facts about Phascogale. "Scientific name for Phascogale is Phascogale tapoatafa". The phascogale is an attractive Australian marsupial that has deep grey fur on its body and head and pale fur on its underparts. Phascogales are carnivorous animals and are about the midway size between the small antechinuses and quoll. They are most distinguished with their long, silky and dark hairs on the tail that form a distinctive brush (brush-tailed) that can be erected. Their snout is notably pointed and eyes are usually large. The Phascogale weigh between 5.3 to 7 ounces (150 and 200g).

The Phascogale lives in forests and is particularly found in just one place in Western in Australia unlike the brush-tailed that’s spread all over the country. Like the brush-tailed, it’s awake at night and sleeps during the day, spending most of its time in trees. Phascogale is about 4 7/16 to 10 5/8 inches (240 to 270 mm) long with soft fur on the body and creamy fur underneath its body. its tail is long and bushy, with its upper part red, giving it the red-tailed name.

Phascogale is a nocturnal animal and shelters in tree hollows lined with leaves. They feed mainly on small insects, rodents and birds, and don’t need a lot of water.

This is fairly distributed in Australia. The Phascogale prefers open forests but it can also be found in rain forests and swampy areas. It is larger than the red-tailed, with a body of length of about 7 7/8 inches (20 cm) and tail length of 7 7/8 inches (20 cm). The Phascogale body is covered with grey fur and creamy fur underneath. The ears are furry, while its eyes are big and black. Bush-tailed phascogales mainly feed on insects, spiders and beetles, but also ear small reptiles and nectar. They also feed on birds and other mammals. The Phascogale use their fingers to collect food from cracks and under barks.

Search the Web for More information on Phascogale at LookSeek.com Search