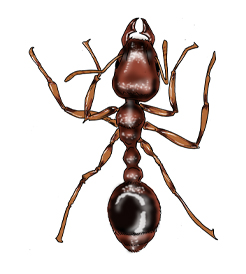 Facts about Pharaoh Ants, "Scientific name for Pharaoh Ants is Monomorium pharaonis". The Pharaoh Ant is a small ant, brown to light yellow in color, notorious for being a major nuisance especially in hospitals. The origin of the pharaoh ants is unknown but they are common Europe, Australia, Southeast Asia, and North and South America. The Pharaoh Ants were the first ant species discovered to use negative (repellant) pheromones. Pheromones are integral for communication in the Pharaoh Ants species. The Pharaoh Ants is a tropical species, but it thrives in buildings almost anywhere provided there is presence of central heating.

Pharaoh Ant workers are about 2.0 millimeters, or 1/16-inch in length. The Pharaoh Ants are reddish brown to light yellow in color with darker abdomens. Pharaoh Ants worker has a non-functional stinger that it uses to generate pheromones. Their petiole (narrow waist between the abdomen and thorax) has two nodes and their thorax has no spines. Pharaoh Ants have poor eyesight, possessing on average 32 ommatidia. Their antennal segments end in a distinct club and with three progressively longer segments. The Pharaoh Ants can be found almost anywhere in the world, and is a major pest in Australia, the United States, and Europe.

The Monomorium pharaonis species use a positive feedback system of foraging. Scouts search for food each morning. When one of them finds food, it instantly returns to the nest, causing several Pharaoh Ants to follow the trail of the successful scout back to the food source. Within few minutes, a large group of the Pharaoh Ants will be upon the food. The pharaoh ants scouts are thought to use both visual and chemical cues to find their way back to the nests. If the foragers are exploring a new area, they employ land rush tactics, in which a large number of the Pharaoh Ants randomly search the region, constantly releasing pheromones.

When the scouts return with food, the Pharaoh Ants queens immediately attempt to beg for their share of the food. Depending on each individual’s condition and food availability, a scout may refuse the entreaties of the queen’s and even run away from her. The Pharaoh Ant workers know the importance of giving up food to the queen, as a healthy queen reproduces and propagates the colony’s genes. However, when there is high scarcity of food, an individual’s own survival outweighs this potential benefit. The Pharaoh Ant worker will therefore refuse to give up food to the queen in such circumstances.

The Pharaoh Ants queens can lay hundreds of eggs in their lifetime. The queen lays 10 to 12 eggs in the early days of reproduction and only 4 to 7 eggs per batch later. The eggs hatch in 5 to 7 days at 27 0C (80 0F) and about 80 percent relative humidity. The larval period is between 18 and 19 days, pre-pupal period is 3 days and pupal period 9 days. About 4 more days are required to produce sexual male and female forms. It takes about 38 to 45 days from egg to sexual maturity, depending on temperature and relative humidity. The Pharaoh Ants breed continuously throughout the year usually in heated buildings and mating takes place in the nest. Mature colonies of this species contain several queens, workers, winged males, eggs, larvae, pre-pupae and pupae. The way Pharaoh Ants communicate is by using chemicals called (pheromones) they can alert other ants where food and also if danger is coming.

Pharaoh Ants can lift and carry three times their weight.
Pharaoh Ants are omnivores like humans, an omnivores, (definition-they eat both other animals and plants).
Ants are the longest living insect of all times they live up to 30 years.

Ants have two stomachs, one that holds food for them to eat and one for other the colony.
You can find Ants on every continent accept Antarctica.
Ants can survive around a full day underwater.
There are more than 20,000, Ant species around the world, there have been 12,500 that have been classified in specific species.

Search the Web for More information on Pharaoh Ant at LookSeek.com Search