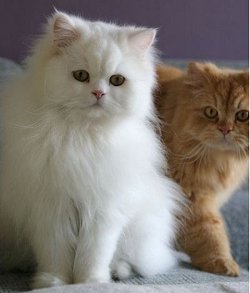 Facts about Persian Cats, "Scientific name for Persian Cat is Felis Catus" The "Persian Cat" are kind, gentle and extremely affectionate, serene and laid back. Persian cats are quiet animals and very beautiful cats. Their coats require a lot of maintenance. If these traits are for you, than you should consider a Persian cat.

Now you should find a well respected Persian cat breeder, a lot of times you vet will know a breeder that produce healthy and good blood lined Persian cats. Be aware of breeders that are just in it for the money, and as a result, they produce inferior cats, that many times will have sickly kittens, who can have a life time of health problems. When you go to a breeder to purchase a Persian cat, pay attention to living conditions of the kittens, are they play full, do the look sick and is the breeder more concerned about making the sale or how you are going to raise the kitten, pay attention to details. Make sure to find out about some kind of contract, if your kitten becomes sick who pays the vet fees and return policies in the case of a listen that is problematic, health and mentally. Make sure to get all of the kittens vaccination certificates from the breeder. You will need to know what shots the kitten has already had and what shots are needed and if the cat has papers, not all cat breeders do. You should only purchase a Persian cat for an indoor pet.

Depending on the type of hair your Persian cat has, will determines on how time consuming the grooming duties of the Persian will take you. Some Persian cats have thick, wooly hair that knots up quickly. Persian Cats have short thick legs, their large, round paws are tufted with fur. The Persian Cats head is round and unusually large for the size of its body and the ears are especially tiny in comparison and are tufted, which is called having ear furnishings. Deepness of eye color is preferred in the Persian Cat breed. The Persian Cat have a noticeable flat face which is part of its famous feature.

Most Persian cats are meticulous self groomers. However you must brush you Persian Cat daily to prevent knots, you might even consider having your Persian cat shaved once or twice a year. Some Persian Cats have sleek, silky hair that never tangles, you only have to brush this hair when needed. Shedding should not be a problem, if you are brushing your Persian Cat every day. Grooming gloves are handy to have, as you pet your cat, the gloves remove the loose hair from your cat. Persian Cats enjoy lots of playtime and form very close bonds with their owners.
Persian Cats average life span is around 12 to 15 years. The reason why Persian Cats can squeeze through very small spaces is that they have no collarbone and free-floating clavicle bones that their shoulders are attach to their forelimbs, that's why a Persian Cat can fit through a hole the same size as its head and they use their whiskers to determine if they can fit through the space.

Persian cats have been around for much longer than 150 years. Long haired cats including the ancestors of the modern day Persians and Angora breeds. The Roman and Phoenician caravans from Persia "now Iran" and Turkey, introduced in the late 1500s the long haired cats, including the ancestors of modern Persian Cats. According to documents of the era. Cold mountains in Persia, is were researchers believe the recessive gene for long hair appeared in the cat population to protect the cat from the cold weather.

The scientific name for cat "Felis Catus". The fear of cats "Ailurophobia".

Persian Cats on average sleep 13 to 14 hours a day and when they are awake, the spend a lot of time licking themselves to keep themselves clean. Persian Cats help control rodents like small rats and mice where they live such as farm homes, warehouse their houses ect.

The cat's hairball is called a "bezoar" (meaning a concretion or calculus found in the intestines or stomach of certain animals, in particular ruminants, formerly alleged to be an effective cure for poison). A Persian Cat can climb up a tree well but can not climb head first down a tree, because all the claws on a Persian Cat paw points the same direction, to get down from a tree, a Persian Cat has to back down. A Persian Cat can run at a top speed of about 30 mph (48.2 km) over a short distance.

Persian Cats can see at levels of light six time lower than a human, this is why Persian Cats can catch mice so easily at night. Persian Cats outer ear uses 32 muscles to control it, and a human has only 6 muscles in its ear and a cat can move its ears 180 degrees. A Persian Cat can move their ears independently. There are over 500 million domestic cats in the world and 88 million in the United States Approximately 40,000 people are bitten by cats in the U.S. annually.

Search the Web for More information on Persian Cat at LookSeek.com Search