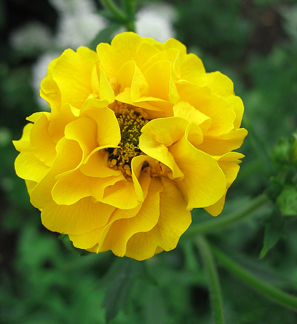 Facts of Perennial plants. These are plants, which stay alive for two years or even more than that. The expression perennial is habitually used to distinguish a plant from shorter-survived biennial plants and annual plants. The word is also extensively used to differentiate plants with modest or no wooded growth from shrubs and trees, which are also perennials in principle.

Herbaceous perennial plants are the undersized flowering plants that use to grow and flower during the spring season and the summer season and die back every autumn season and winter season. These plants will again return during the spring season from their root-reserve. However, according to the harshness of the local type of weather, a plant, which is a perennial in its local habitat or in a gentler backyard, may be considered by a gardener as a yearly and planted out each year, from cuttings, from seed, or from divisions. Perennial plants, such as tomato vines, survive a number of years in their natural tropical or subtropical environment, but they are developed as annuals in temperate areas, as they do not endure the winter.

There is as well, a category of non-herbaceous or evergreen, perennials, as well as plants, such as Bergenia that maintain a covering of leaves all through the year. A midway category of plants called sub-shrubs, such as Penstemon, maintains a vestigial wooded structure during winter. The local type of weather may state whether plants are considered as perennials or shrubs. For example, in colder temperate types of weather, several Fuchsia bushy varieties are cut to the earth to defend them from winter ice.

Perennial plants can either be long-lived or short-lived plants, such as some woody plants similar to trees. They comprise an extensive variety of plant collections, ranging from liverworts and ferns to the highly varied flowering plants, such as grasses and orchids.

Perennial plants, which offer flower and fruit only once and afterward expire, are called semelparous or monocarpic plants. However, nearly all perennials are iteroparous or polycarpic, offering flowers over several seasons in their life span.

Perennials usually grow structures, which allow them to acclimatize to existing from one year to the subsequent year through a structure of vegetative reproduction instead of seeding. These forms comprise rhizomes, tubers, bulbs, woody crowns, etc. They might contain dedicated crowns or stems, which allow them to live dormancy periods over dry or cold seasons in the year. Annuals generate seeds to prolong the variety as a novel generation while the cultivating season is appropriate, and the seeds stay alive over the dry or cold period to commence growth while the circumstances are again appropriate.

Several perennial plants have developed particular features that enable them to live extreme environmental and climatic conditions. Some plants have acclimatized to endure dry and hot conditions or freezing temperatures. Those plants are inclined to put in a lot of resources into their versions and habitually do not offer flower and set seed, pending after some years of development. Some perennial plants generate relatively big seeds, which can have a benefit, with bigger seedlings formed following germination that can better vie with other plants. A few annuals generate many more seeds for each plant in a single season, whereas some other perennial plants are not under the identical pressure to generate huge numbers of seeds, but they can generate seeds over several years.

Search the Web for More information on Perennial Plants at LookSeek.com Search