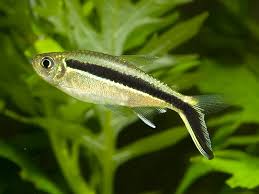 The Penguin Tetra is a type of fish that belongs to the Characidae family. Other names it is called: Hockey Stick Tetra and Penguin Fish. It is commonly found in tributaries and main rivers in in Brazil, South America. For most fish keepers, the Penguin Tetra makes a wonderful addition to their aquariums.

Description
In terms of color, this species is golden with a black vertical strip that runs all the way from the bottom half of the tail to the head. This gives it the appearance of a Penguin, hence the name Penguin Tetra.

The habitat of these types of fish is usually characterized by water conditions with a temperature between 72 - 82 F degrees Fahrenheit (22 - 28 Cel) and a pH of about 5.8 to 8.0.

Behavioral Patterns
This fish has a relatively calm disposition making it an excellent choice in aquariums where you prefer a mixture of fishes. It neither bullies nor expresses aggression towards other soft water fish. They usually move in groups consisting of 6 fish of the same species. The surroundings which consist of rocks, live plants and driftwood give them a perfect habitat and a place where they can camouflage so as to hide from predators.

Feeding
The Penguin Tetras are omnivores and in the wild they eat small insects, worms, larvae and crustaceans, in an aquarium food such as dried bloodworms, brine shrimp, daphnia, pellet food and other small organisms is exceptable. This makes it one of the easiest fish to take care of in aquariums.

Reproduction
The Penguin Tetras breeds in waters which are slightly acidic. In seasons of breeding, the female Penguin Tetras usually display a fuller belly and this creates a clear distinction between them and the males. After the eggs are laid, they take approximately 12 to 15 hours for the hatching process to begin. In aquariums, the fish are usually removed after the hatching so as to enhance the chances of survival for the fry. When mature, the Penguin Tetras can measure up to 3 inches (7.6cm)in length. The lifespan for the Penguin Tetras is about 5 years if it lives in a good environment. Here are a few fish that they can coexist in a fish tank, Silver Tip Tetra, Red Eye Tetra, Diamond Tetra, Black Skirt Tetra, Blind Cave Tetra, Head-and-Tail-Light Tetra, Buenos Aires Tetra, Flame Tetra, Congo Tetra, Emperor Tetra, Lemon Tetra, Serpae Tetra, Clown Loach, Kuhli Loach, Bloodfin, Cherry Barb, Sailfin Molly, Dwarf Gourami, GloFish, Harlequin Rasbora, Iridescent Shark, Swordtail, Pearl Gourami, Red Tailed Shark, Molly, Otto Catfish, Platy, and many more, ask you pet store for others fish that will be good partners in your tank.