Back To Category Sea Bird Other
Title : 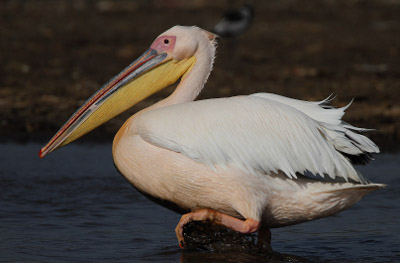 Pelicans come in more than half a dozen species, and all of them have the throat pouch that they are famously known for. The Pelican is an amazing bird, Antarctica is the only continent that you will not find the famous Pelican. A Pelican is easily recognized by its short legs, large body and webbed feet The Pelican can be found in warm regions, near estuaries (an arm or inlet of the sea at the lower end of a river), rivers, reservoirs and lakes. There are eight species of Pelicans. The Pelican is a Carnivore. Pelicans use their elastic pouches in their beaks to catch fish, different species of Pelicans use it in different ways.

Many pelicans fish by swimming in groups to trap the fish and force the fish into shallower water, they will beat there wings against the water to force the fish to shallower water. While diving for fish, pelicans try to hit schools to catch more fish at one time. Pelicans can eat 4 pounds of fish in a day. Pelicans have that big bill, they do not store fish in their pouch of the mouth, they simply use it to catch fish and then tip it back to drain out the water and swallow the fish when the bill is drained. Young pelicans eat by sticking their bills into the throats of their parents and removing the food to eat. A Pelican has the largest bill of all birds. The American white Pelican bill, can reach up to 18 inches in length. Underneath the bill, the pelicans throat pouch can hold up to 3 gallons (11 1/2 liters) of water.
>Pelicans are one of the largest birds there is. They can grow between 4 and 6 feet (1.2 to 1.8m) in length, and between 15 and 30 pounds (6.8 to 13.6 kg) of weight. The wing span is about 10 feet (3m). Life span in the wild is about 12 to 25 years.
The Brown Pelicans are on the endangered species list. The brown pelican, hunts for food by diving on fish (most of the time a type of herring called menhaden)

Pelicans are very social birds and like to travel in flocks, often spread out in a line. They usually breed in groups called colonies, which consisting of several hundreds of birds. which will mean they will often gather on islands. They can fly to a height of 10,000 feet by using warm wind currents. Pelicans will scoop out potential food from the sky and catch it by flying fast toward it with great accuracy.

Some species of Pelicans can mate throughout the year, while others mate only seasonally.
Males will use certain tactics to attract females during the mating season. Certain males have colorful feathers and some others have the ability to change the color of their bill, pouch and neck into brighter colors during the interesting courtship .
Both females and males contribute to the making of the nest. The nests that are usually located under the trees near water. Nests are built using leaves, sticks and feathers.
Females will usually lay 1 to 3 eggs and on some occasions 4 or 5 eggs. The eggs are oval, white and rough textured. Incubation period lasts between 26 and 36 days. Pelicans incubate their eggs with the skin of their feet for heat, they stand on the eggs to keep them warm. In the middle of the twentieth century the pesticide, such as DDT caused pelicans to lay thinner egg shells that would cracked from the weight of the incubating parents. After almost becoming distinct from North America in the 1960s through the 1970s, Brown Pelicans made a great comeback thanks to new laws pasted to control the use of pesticide. After nearly disappearing from North America in the 1960s and 1970s, Brown Pelicans made a full comeback thanks to pesticide regulations.

Search the Web for More information on Pelican ( Pelecanus) at LookSeek.com Search