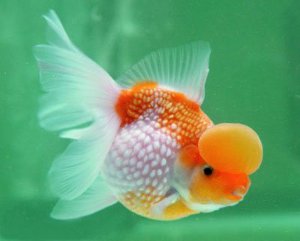 Facts about Pearlscale Goldfish. The Pearlscale Goldfish has an egg shaped look, and many look like they swallowed ping pong ball.
The Pearlscale grows to adult Size of about 4 to 6 inches (10 to 15 cm). The lifespan is about 10 to 15 years but can live longer
Pearlscales are the only goldfish breed to have scales with a different shape than a common goldfish. The hard raised area in the middle of the scale, the name of pearlscale is derived from this area because its generally white and looks like a pearl. The scales are thicker at the top and a hard raised area in the middle caused by deposits of calcium carbonate. This is what gives the Pearlscale Goldfish their bead-look appearance. All Pearlscale goldfish have nacreous scales, this is what makes the scales translucent.
The first time the Pearlscale goldfish is mentioning is from the late 1800s or early 1900s. The colors Pearlscale Goldfish comes in chocolate, calico, black, red, blue, and red-white combinations or mottled orange/white/red combinations.
The breeders that raise Pearlscale Goldfish prefer that the body depth is greater than 2/3 of the body length. Wider seems to be better and should be as wide as it is deep. They can be a really good pond fish if you want. The only problem is unlike other pond fish, they are not very tolerant of the cold water, and should be kept in water temperatures of no less than 55 degrees fahrenheit (12 cel). The Pearlscale Goldfish are not a fast swimmer, Because of their round bodies. So you should keep them with similar goldfish (Calestails, Black Moors, lionheads, bubble-eyes goldfish ect.), so they don't get bullied out of all the food. The Pearlscale Goldfish named Hamanishiki have a headgrowth, and the most popular headgrowth of the Pearscale is round and even and is in just one piece. There should ideally be no smaller growth behind the major headgrowth. The Pearlscale Goldfish Fins should be short and stand up straight with a rounded look. All fins are paired except the dorsal. Finnage is very close looking to a standard Fantail with a divided Caudal fin. Transparent fins are excepted in Pearlscales. Pearlscale Goldfish grows some what large and requires at least 30 gallons (113 likters) of water if you want to keep it in an aquarium. You can also keep them in a pond. The more room, the better, for your Pearlscale Goldfish.
The Pearlscale Goldfish will eat most types of food, but you must restrict its diet some due to the unnatural shape of the fish's body. Since it is so rounded, the internal organs of the fish are very cramped inside its body. A Pearlscale Goldfish should not be fed dry food that has not been soaked, such as pellets and flakes. Brime shrimp, bloodworms, daphnia, and vegetable food like lettuce and cucumber are also good for the fish. Also once a week feed Pearlscale shelless peas to prevent constipation. If you Pearlscale Goldfish eats food that has not been soaked, the pellets or flakes will absorb water from the fishes internal organs and swell inside the fishes body. This may cause damage to the fish.

Search the Web for More information on Pearlscale Goldfish at LookSeek.com Search