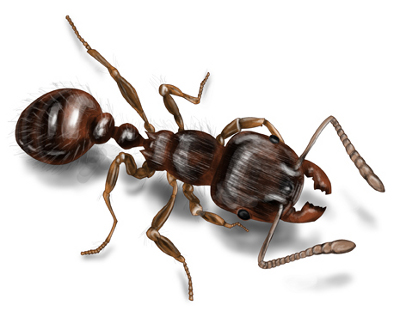 Facts about Pavement Ants, "Scientific name for Pavement Ants is Tetramorium caespitum". Pavement Ants are a common ant species that originated from Europe before they spread to other parts of the world like the United States, Pennsylvania, New England and Tennessee. "Fear of Ants Myrmecophobia".

As their name suggests, Pavement Ants usually build their domiciles on concrete house slabs or around garages and other structures build of concrete. Some Pavement Ants also build their nests around firewood, bricks and stones. The male Pavement Ants can live for as long as five years while the females can live a little longer (up to approximately 8 years).

A single nest of pavement ants can house more than 10,000 workers. This is considered a unique nature of the Pavement Ants species because it is not common to find such number in the nests of other ant species. When recruiting nest-mates that can help them to hunt for food, pavement ants use a chemical trail.

Unlike many ants species, the pavement ants have two nodes on their petiole, a pair of spines on their back, and grooves along their head. The Pavement Ants have a body size of between 2.5 and 4 millimeters. They come in a wide range of colors ranging from brown, dark to black. To add on their temperament, pavement ants have a two-segment pedicel connected to the abdomen and thorax, two spines on the dorsal thorax as well as a stinger connected in the back abdominal segment.

Pavement ants feed on different types of foods ranging from sugary diets like nectar, fruits and sugar to syrups. They also feed on dead insects, small seeds and grease. The Pavement Ants species can eat virtually every kind of food that is taken by human beings be it protein, carbohydrate, vitamin or oil.

Mating for pavement ants is mostly high during the summer and spring seasons. In order for new ants to be born, the drone which is the male ant has to mate with the queen. Just like many ant species, pavement ants also take the nuptial flights, where the drones and queens fly up the air to mate. After mating, the queen searches for a location where it digs a nesting chamber in which it stays till the eggs are hatched. Even after the ant-lings are hatched, the queen stays in their chamber until the ant-lings grow up which may take two to three months.

Pavement ants are known to be very aggressive and usually move in colonies. When in need of settling in new settlements, they often subdue new places regardless of whether there are enemies or not. In most cases, these invasions of new colonies result in aggressive battles that end up causing the death of a large number of Pavement Ants. This is one of the main reason why the lifespan of male pavement ants are shorter as compared to that of queens. These battles are known to occur mostly during the spring when the pavements are very hot. During the summer, pavement ants are less aggressive and instead of invading new colonies they tend to hollow out the sand amid the pavements in order to vent their nests.

There are more than 20,000, Ant species around the world, there have been 12,500 that have been classified in specific species.
Pavement Ants can lift and carry three times their weight.
Pavement Ants are omnivores like humans, an omnivores, (definition-they eat both other animals and plants).

Pavement Ants have two stomachs, one that holds food for them to eat and one for other the colony.
You can find Ants on every continent accept Antarctica.
Pavement Ants can survive around a full day underwater. The way Pavement Ants communicate is by using chemicals called (pheromones) they can alert other ants where food and also if danger is coming.
The Queen Pavement Ants only job in life is to lay 1000 of eggs in their life time. All worker, soldier and queen ants are female. The worker Pavement Ants, that you see running around, the wingless Pavement Ants are females that don't reproduce, these are the ants that hunt for food and take care for the queen's offspring, protect the community and work on the nest and other community duties.
The male Pavement Ants usually have only one role in life, mating with the queen and after they have performed their duty, they can die.

Search the Web for More information on Pavement Ant at LookSeek.com Search