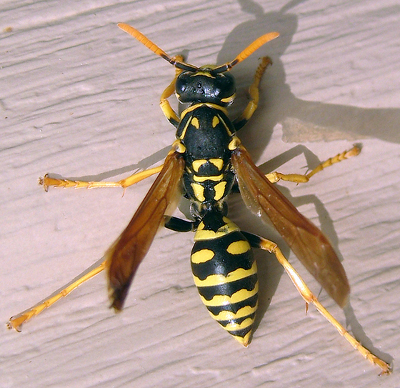 Facts about Paper Wasps, "Scientific name for Paper Wasp is Polistes". Paper Wasps are also known as umbrella wasps. The name umbrella is given to them because of the designs of their nest. The Paper Wasps are around 1/2 to 1 inch (.30 to 1.5) long. They are known to gather fibers from dead wood and plant stems. The Paper Wasps mix them with their saliva and construct their nests which are water resistant. The nests are gray or brown in color.
Scientific name for wasp (Hymenoptera) means -membranous wings- this large variety of insects have four transparent wings and the females typically have a sting. includes ants, bees, wasps, horntails, and sawflies.

Paper Wasps are members of vespid and subfamily of polistnae. These subfamilies usually consist of wasps that make their nest using paper. These are hornets, yellow jackets and stenogastrinae.

Around 22 species are found in North America and around 300 species have been identified throughout the world. But in general Paper Wasps species are around 1100 which are spread across the globe.

Several researches have been concerned the species. Most researchers and universities have come up with interesting facts that identify Paper Wasps. They have been found to have face recognition just like human beings. They are able to identify each other by looking at their faces.

When a wasp sees another, the features of the face register to the brain and that image is stuck. So when their path crosses once again, they will still recognize that face.

This is a very special adaptability that keeps peace in the colony. In fact some species like Paper Wasps are very unique such that they have variable face patterns in each member. Despite having several queens whom the male Paper Wasps would love to mate with, they are in a position to know which is beaten and who have a higher rank in the hierarchy.

More researches continue to give out different adaptations of Paper Wasps. They have pointed out that the toxic ability of each Paper Wasps can be measured by using the size of the body and color intensity. The Paper Wasps with larger bodies and high color intensities have lethal amount of toxin. These toxins are used to scare predators like cats, mammals among others.

Paper Wasps are not as aggressive as other members of their family. They only sting if they are attacked. The Paper Wasps sting can be very painful and cause some unnecessary problems. This is why it is not advisable to keep them near human habitats.

The Paper Wasps are beneficial to gardeners due to the diet they keep. Mostly the Paper Wasps feed on garden pests, insects like flies, beetle larvae and caterpillars. This helps in controlling pests in gardens.

The Paper Wasps build their nest in sheltered places like eaves of a house, clotheslines and branches of the trees or even at the end of open pipes. Their nests mostly are made from paper. However, this also varies with the families because there are some that build with mud and others chewed fibers.

These nests are open combs which have cells for brood rearing. The nests have a petiole that anchors them. The Paper Wasps secrete a chemical which repels ants and they use it to spread at the base of the anchor in order to prevent the loss of the eggs. This allows the eggs to stay in the cells and hatch.

Search the Web for More information on Paper Wasps at LookSeek.com Search