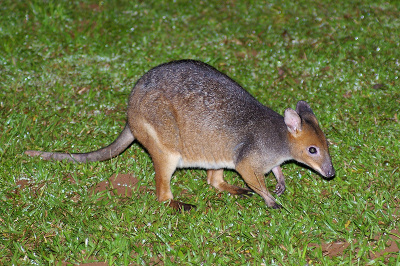 Facts about Pademelon. "Scientific name for Pademelon is Thylogale". Pademelons are marsupials belonging to the genus Thylogale. They can be easily seen in forests. The Pademelon are among the smallest in the family of Macropodidae. In terms of body structure, the Pademelon resemble kangaroos and wallabies. In contrast to wallabies, pademelons have thicker, shorter and sparsely haired tails.

Pademelons have a body length of 11 3/8 to 24 7/8 inches (290 to 630 millimeters) with a tail that measure up to 20 inches (510 millimeters). They have sexual dimorphism with the males being heavier than the females at 8.3 to 15.4 pounds (3.8 kg to 7 kilograms) respectively. Some of the variations of pademelons include the red-necked (Thylogale thetis), red bellied, dusky and the red-legged variety. The red-necked pademelon is grizzled gray in body color and has a light hip stripe.

Habitat and Geographical Distribution of Pademelon

The red-necked pademelon which is the most predominant species can be found in thick scrubs, rain forests and grassland areas. They are fond of eucalyptus forests. Geographically, the red-necked pademelons can be found in the coastal areas of New South Wales and Queensland. The red-legged variety can be seen in south central New Guinea while the red-bellied pademelons are predominant in Tasmania.

Pademelons are Polygynous just like other macropods. Studies have suggested active mate choice by the females who hang around larger males when in oestrus. They attain sexual maturity at 18 months of age and reproduction usually occurs in autumn and spring on the northern part and in summer in the southern parts. The Pademelon generally give birth to a single young after a gestation period of 30 days but have been reported to give birth to twins. The baby (joey) usually completes its maturity in the pouch within a period of around 6.5 months.

Pademelons feed on leaves, bark, roots and grass. Red-necked pademelons have been sighted severally feeding on the forest edge at night times. This reduces their chances of being caught by diurnal predators.

Search the Web for More information on Pademelon at LookSeek.com Search