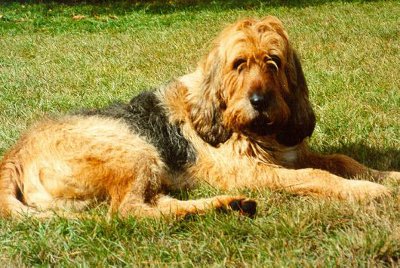 The Otterhound Dog breed is a great scent chasing dog, with a slightly rectangular-shaped body. They have a big, narrow head and the muzzle length is equal to the length of the head, with a slight stop. They have a dark colored nose, with spaced nostrils. The teeth of the Otterhound Dog meet in a scissors bite. Their eyes are set deep and contain a color that matches the color of their coat. The low-set, elongated, folded ears are set low to reach the top of the nose, suspending down loosely.

Only humans and dogs have prostates, But a dog doesn't have an appendix.

Otterhound Dogs sweat glands are between their paw pads.
A Otterhound Dog sees in color and have better low light vision. Dogs have three eyelids, a lower lid, an upper eyelid lid and a third lid, that is called a haw or nictitating membrane, this keeps the Otterhound Dogs eye protected and moist. Otterhound Dogs eyes have a special membrane for seeing better at night, called a tapetum lucidum - a dogs reflective layer in the choroid chiefly of nocturnal, causing the eyes to glow when light at night hits the eyes and they consist of some layers of smooth flat cells covered by a section of double deformed crystals

The Otterhound Dog breed is brave, clever and animated that is loyal to its family and good with kids. These breeds are hospitable, affectionate and cheerful in nature with a lot of strength. The Otterhound Dogs are better companions, and they cope well with all family pets, other dogs, kids and people. However, owing to their hunting nature, these dogs will hound the non-canine animals.

The weatherproof coat of the Otterhound Dog breed must be combed or brushed at least once in a week to keep away from matting. The breed may require its beard cleansed more often. The Otterhound Dog is a medium shed breed.

All dogs are identical in makeup big or small– 42 permanent teeth and 321 bones. Otterhound Puppies have 28 teeth and when they become adult dogs they have 42 teeth. Female Otterhound Dogs are in heat for matting for about 20 days twice a year. Otterhound Puppies for their first few weeks will sleep ninety percent of the day and their vision is not fully developed until after the first month. Female Otterhound Dogs are pregnant for 60 days before they’re puppies are born

Average body temperature for a Otterhound Dog is between 101 to 102.5 degrees
A dog is an omnivore, (definition-they eat both other animals and plants). All Dogs are direct descendants of wolves.

A Otterhound Dog’s mouth can apply approximately 150 to 200 pounds of pressure per square inch and an American Pit Bull Terrier, German Shepherd Dog and a rottweiler can have 320 LBS of pressure on avg.

Search the Web for More information on Otterhound Dog at LookSeek.com Search