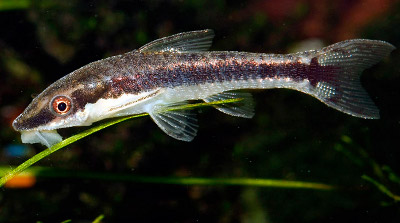 Otocinclus refers to a small type of algae eating fish commonly found in tropical fresh water. It is a diligent worker and is fun to watch especially when it interacts in groups with others. The Otocinclus is also referred to as the dwarf suckermouth catfish. This fish species is a member of the family Loricariidae which are herbivores.

Description
The Otocinclus have prominent barbels which make them easily identifiable due to their cat-like whisker images. They have no scales but posses a strong and hollow bonified ray on their pectoral and dorsal fins. This ray produces a stinging protein whenever the Otocinclus is irritated.

Behaviors
The Otocinclus school under certain environmental conditions. For instance when they are stressed following their introduction into a water tank or when they are looking for food. During other times, they can be seen moving in different directions. Even when feeding, they do not seem to notice one another.
They are also nocturnal types of fish and as such most of their activities are at night. Whether in their natural or captive environments, these fishes tend to dwell at the bottom of rivers, lakes or water tanks.
At times, the Otocinclus usually swims to the surface and takes a gulp of air before diving back to the bottom end. This is a way for them to get oxygen into their body systems.

Reproduction
The female after being pursued by the male releases eggs from her vent and holds them in place with her ventral fins and moves to a flat surface where she sticks the eggs. The male then fertilizes them there.

Search the Web for More information on Otocinclus (Otocinclus vestitus) at LookSeek.com Search