Back To Category Orangutans
Title : 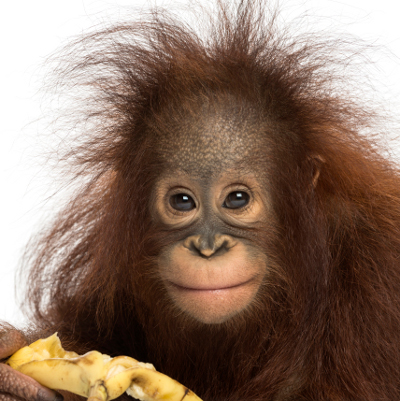 Facts about Orangutans. "Scientific name for Orangutan is Pongo". Orangutan is one of the most treasures arboreal mammals who have strong feet and arms to enable them jump from tree to tree. Orangutan is name referring to brown-haired primates but the name itself means “Man of The Forest”, that is, in Malay Language. The Orangutan actually live in solitary existences in the lowland forests of Africa, Amazon and many other forests and islands of the world but due to environmental changes and adaptation, they currently only found in the rain forests of Sumatra and Borneo. The Orangutan normally feed on mangosteens, slurp water, lychees and figs among other edible wild fruits. Ideally, they live in trees and adult males can weigh up to 200 pounds (90.7 kg). The Orangutan are native to Malaysia and Indonesia that is why Orangutans are entirely Asian species primates. Existing in two species, the Bornean Orangutan and the Sumatran Orangutan are the most arboreal of great apes and they are covered by reddish-brown hair unlike black as witnessed with gorillas.

Males and Females of the Orangutan

While the male Orangutan weighs more than their counterparts, the female; essentially, they differ in appearance and size. Adult males produce long calls using their distinctive cheek pads to intimidate rivals and attract females. However, younger male Orangutans resemble the females and they don’t exhibit these characteristics. They have strong social bonds, which mostly exist between young ones and their mothers. The males and the females feed on the same diet and they can both live up to 30 years. The Orangutans are the most intelligent wild animals who use sophisticated tools to build their homes from foliage and branches. Orangutans are classified as one the endangered species because of human activities such as illegal pet trade, poaching and destruction of forests to pave way for developments. Nevertheless, several conservation centers have been established to ensure survival of Orangutans.

Orangutans live in both primary and old secondary forests especially the peat swamp and dipterocarp forests. The Sumatran Orangutans live in high altitude areas as high as 4921 feet (1500 meters) above the sea level while the Bornean Orangutans live in low altitudes preferably less than 1000m above the sea level. Other habitats that Orangutans may dwell in include cultivated fields, gardens, young secondary forests and shallow lakes. The Orangutan spend most of their day nesting, feeding and traveling but they normally rest in the morning and roam about searching for food in the late afternoon. In the evening, they prepare their nests for sleeping. Orangutans are not good swimmers. Tigers, leopards, wild dogs and even crocodiles prey on them and they utilize their intimidating calls to communicate and warn and alert each other of the approaching danger. Infants make soft sounds when they are distressed and sometimes they even blow raspberries.

As mentioned earlier, they mostly feed on wild fruits, nuts and seeds. Typically, the Orangutan are opportunistic dieters with fruits making 70% of their daily diet. The Bornean Orangutans eat up to 317 different foods such as barks, shoots, insects, honey, bird eggs and leaves. Orangutans normally give birth during and after the copious fruit season. While the male Orangutans reach their maturity at 15 years old, the females experience their first ovulation circle when they are 6 to 10 years old.

Search the Web for More information on Orangutan at LookSeek.com Search