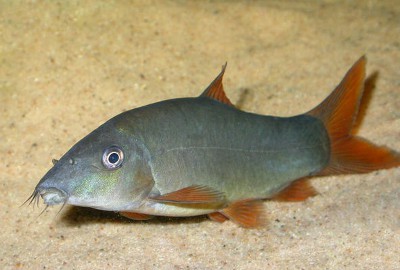 Physical Description
Botia modesta is a fish species that is laterally compressed with a flat belly and an arched back profile. It has a caudal fin that is forked and a short and wide caudal penuncle. In terms of body colors, the Orange-Finned Loach has a bright blue to gray-blue color with a belly that is whitish. The fins range from orange to yellow hence its name. The caudal penuncle has an indistinct dark marking.

Size
A mature Orange-Finned Loach measures about 10 to 12 inches in length. While in the wild, they grow up top 12 inches however in the aquarium they rarely exceed the 10 inch mark.

Growth Conditions
This type of fish does well in waters that have a temperature of between 78 and 82 degrees Fahrenheit. It prefers still and slow moving water. The acidic level of the water in which the Orange-Finned Loach resides should have a pH of between 6 and 7.5. The water hardness on the other hand should measure around 1 to 8 dGH.

Social Behavior
The Botia modesta is a shy species that becomes active when kept in a school. Naturally, this species is highly territorial and will therefore aggressively defend its confines against any intruders. They combine well with large and robust species. Some of the companions that it gets along well with are Barbus schwanenfeldi, Anostomus, Serrasalmus, Cichlasomines and Scleropages.

Sex
The male Orange-Finned Loaches are slender and smaller than their female counterparts when mature. This is a clear distinction between the males and the females.