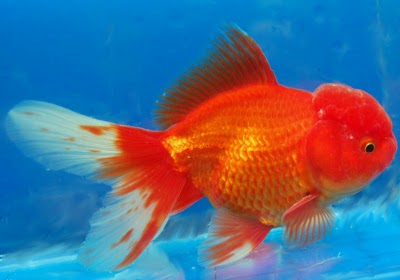 Facts about Oranda Goldfish. The Oranda is a mixed breed between a Veiltail goldfish and a Lionhead goldfish. When it was first imported from China to Japan it was mistakenly thought to be native to the Netherlands, and was therefore named the "Dutch Ironmask" from which its English name "oranda" derives. It comes in many colors including panda-colored, white and red or black and red. These fish are sensitive to cold water not like the common goldfish who is more tolerant to cold water. The wen of the Oranda goldfish is the brain-looking tissue on the top of their head, The Oranda goldfish's wen can grow to be very large for larger Oranda, this can lead to some eye sight problems as well as some swimming issues. The wen needs special care, because it is prone to bacterial infections. These fish can be very awkward swimmers with their egg shaped bodies and this problem increases as the wen grows on the fish, making the Oranda goldfish very top heavy and it begins to change color after two to three years of growth. Tank Requirements: Oranda goldfish can grow to be 8-12" in length. The care level for Oranda is difficult and so it's recommended that experienced care is given to the Oranda goldfish.
Environment: Freshwater Fish, Native to: Asia, Diet: Ominivore, flakes or pellets, Water Temperature: 65 to 78 degrees F.
You should at least provide a 20 gallons fish tank, minimum for your Oranda goldfish and as the goldfish grows increase the tank size. This tank should be larger if you want to have more than one fish.
The headgrowth of young fry(baby fish), may take one to two years to develop. The Oranda can reach 8 to 12 inches (20 to 31 centimeters) long. Recently the blue scale Oranda goldfish was breed, but these fish are very rare.

Search the Web for More information on Oranda Goldfish at LookSeek.com Search