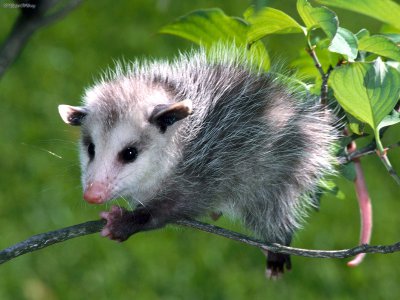 Facts about Possum. "Scientific name for Opossum is Didelphimorphia". The opossum, or possum for short, is the only native marsupial in North America. When North and South America joined several million years ago, many species such as the ancestors of llamas headed south. The opossum was one of the few species to move north and flourish.
The first animal formally called an opossum was a Virginia opossum in 1610. The name comes from an Algonquian word meaning white dog. The term possum can refer to Australian Phalangeriformes, but this article is about the American species.
Opossums are the largest group of marsupials in the Americas, now included at least 103 species. The Opossum are omnivores, eating everything from insects to leaves. They spend time both in the trees and on the ground. Opossums have partial or full immunity to a variety of pit vipers’ venom such as the rattle snake. While skunks often carry rabies, opossums rarely do.
Opossums have a prehensile tail like South American monkeys. Young possums can hang by their tails. Adults cannot use the tail to support the whole body but can use it to improve their grip on branches or use it to carry leaves and branches for the nest. They have long snouts, a narrow skull and sagittal crest to which the muscles of their unusually large jaws attach. Opossum females have a marsupial pouch. Young are born about two weeks after conception. They make their way to the mother’s pouch where they will nurse. The young will stay in the pouch for another two to three days before leaving it. This is the point where a mother possum may be seen with as many as a dozen young on her back. Opossum young soon migrate off on their own. Average life expectancy in the wild is two to four years.
Opossum are well known for their habit of “playing possum” or mimicking the appearance of being dead in the hope that it deters predators seeking living prey. The act of playing possum is not an intentional act but a reflex triggered when threatened. The body automatically releases a bad smelling chemical to enhance the appearance.

Search the Web for More information on Opossum at LookSeek.com Search