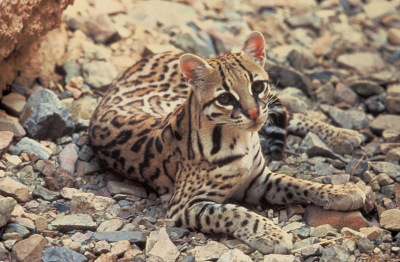 Facts about Ocicat Cat, "Scientific name for Ocicat Cat Felis Catus". Having a tabby temperament, the Ocicat Cat is quite good at getting along with people, even the strangers. It doesn’t discriminate and gets fond of all. It enjoys staying busy with stuff, sports activities and the company of humans. The Ocicat Cat hardly show any kind of problem with other pets in the house. The Ocicat Cat don’t like to be lonely. Leaving them alone for a longer period of time might get them boredom and resulting health issues.

Ocicat Cats can see at levels of light six time lower than a human, this is why Ocicat Cats can catch mice so easily at night. Cats outer ear uses 32 muscles to control it, and a human has only 6 muscles in its ear and a cat can move its ears 180 degrees. A Ocicat Cat can move their ears independently.
The cat's hairball is called a "bezoar" (meaning a concretion or calculus found in the intestines or stomach of certain animals, in particular ruminants, formerly alleged to be an effective cure for poison). A Ocicat Cat can climb up a tree well but can not climb head first down a tree, because all the claws on a Ocicat Cats paw points the same direction, to get down from a tree, a cat has to back down. A Ocicat Cat can run at a top speed of about 30 mph (48.2 km) over a short distance.

The Ocicat Cat can grow up to 5.5 to 14 pounds. The Ocicat Cat prefer active members of the family who consistently move here and there for household works. The Ocicat Cat breed has a weakness for mere observance while something interesting happens around it. It also follows its favorite person across the house. Responsible working singles may adopt Ocicat Cat, but they have to be very careful about the attention the cat must get. If they are going out for few days, the Ocicat Cat must be left with a familiar person. No doubt, experienced cat owners would know how to handle such a cat.

The Ocicat Cat looks like Wildcat with a spotted coat. The cat is extremely active and goes out frequently. It loved to play hide-and-seek, fetching and other physical exercise involving games with family pets. The Ocicat Cat are known as quick adaptive cats as far as change of residence and environment is concerned. So, they may be perfect for responsible people who move a lot. They are a bit nosy about things, so things that should not be touched by a cat should be locked inside only-human-operable containers.
Ocicat Cats on average sleep 13 to 14 hours a day and when they are awake, the spend a lot of time licking themselves to keep themselves clean. Ocicat Cats help control rodents like small rats and mice where they live such as farm homes, warehouse their houses ect.

A female Ocicat Cat is called a "queen or molly", male Ocicat Cat is called a "tom" and the name "clowder" is called a group of young cats, baby cats are called kittens. Ocicat Cats have very sharp hearing and their sense of smell is fantastic.
Ocicat Cats average life span is around 12 to 15 years. The reason why cats can squeeze through very small spaces is that they have no collarbone and free-floating clavicle bones that their shoulders are attach to their forelimbs, that's why a Ocicat Cat can fit through a hole the same size as its head and they use their whiskers to determine if they can fit through the space.

The Ocicat Cat learn basic commands and cat sports quicker than any other breed. They can also wear harnesses and walk on leashes.

Ocicat Cats are low maintenance cats. Rubbing a chamois across its coat once in a week for the purpose of removing dead hairs is enough.
However, Ocicat Cats are prone to gingivitis. The owner has to brush its teeth regularly to avoid tartar buildup.

The average temperature of a Ocicat Cat is 101.5 °F. The cats heart beats at 110 to 140 a minute, that is almost twice as fast as a human heart. A Ocicat Cats has 30 teeth while a kittens has about 26 teeth that they will lose at about 6 months of age. A Ocicat Cat has the ability to jump up to six times its length.
The fear of cats "Ailurophobia".

A Ocicat Cat rubs against a person to not only to be affectionate but also to mark out its territory. A Ocicat Cat does not like water because its fur is not insulate it well when it gets wet. A Ocicat Cat averages about 12 whiskers on both side of its face. A Ocicat Cats jaw can not move sideways, there for a cat can not chew large pieces of food. A Ocicat Cats back is highly flexible because of its 53 loosely fitting vertebrae. The body of a Ocicat Cat has 230 bones. While a human body has 206. Compared to a humans who only have 34.

Search the Web for More information on Ocicat at LookSeek.com Search