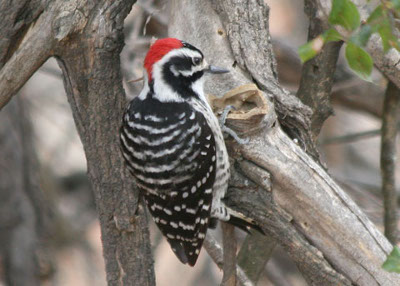 Male and female Woodpeckers are able to drum hollow trees logs execrate. Since woodpeckers do not have vocal cords and don't sing, this pecking activity also plays an important role in communicating with each other. Woodpeckers drumming is also to attract a mate, mark out territory, both sexes are known to drum.

Nuttall’s Woodpeckers have zygodactyls feet and rigid tail feathers that enable them to keep up an upright position on trees. Nuttall's Woodpeckers have zygodactyl feet, having 4 fingers, which means they have two toes facing the front and two toes facing the back, that helps them to have a strong grip on trees vertically. The Nuttall's Woodpecker use these 8 fingers with their stiff central portion tail feathers to brace on trees as they climb. The underparts of the Nuttall's woodpecker are white in color, with marked sides and barred flanks. They have a black-and-white colored face, with white color nasal bristles on top of the bill, which is short and black in color. The Nuttall's Woodpecker back crown part is small, and their legs and feet are gray in color. While foraging, male Nuttall’s Woodpeckers are inclined to work on the tree trunk and bigger branches of trees, whereas females make use of the smaller branches.

The Nuttall’s woodpecker mainly feeds on pest larvae of click beetles, wood borers, and ants, found by beating and probing into the gaps in oak trees. The Nuttall's Woodpecker also feed on sap from sap gaps, made by red-breasted sapsuckers in willow and birch, and also feeds on a diversity of berry seeds.

When feeding, drumming and building a nest cavity, a woodpecker can peck up to 20 times per second, wow that's fast! or a total between 9,000 and 12,000 pecks in a day.

Almost all woodpeckers have a prominent surge in flight comprise of three rapid wing flaps, followed by a quick glide when the woodpeckers wings are tucked against its body rather than spread out like many other birds.

The average life span of a woodpecker in the wild is 4 to 11 years, depending on the species and environment

Woodpeckers possess a protective ocular mechanisms for protecting its eyes from shaking from the pecking impact. woodpeckers show a restricted axial globe movement due to the tight fit within the fascial tissue connections and orbit between the sclera and orbital rim.

The eyes of the woodpecker are covered with a nictitating membrane (from Latin nictare, to blink)— a translucent and transparent third eyelid - that protects the woodpeckers eyes from flying debris while pecking. There are more than 190 species of woodpeckers worldwide, but none of them are found in polar regions, Madagascar, New Zealand or Australia.

An average woodpecker's tongue is up to 4 inches (10.16 cm) long. The length can be a little different depending on which species of woodpecker. Its tongue wraps around the reinforced skull structured and squashy bone, to even out the impact of the pecking force. Many woodpeckers have barbed tongues that helps them remove bugs from holes and tree bark.
Feathers that look like hairs on the woodpecker nostrils, prevent ingestion of wood particles.

Search the Web for More information on Nuttalls Woodpecker at LookSeek.com Search