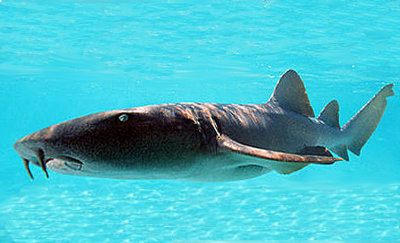 Facts about Nurse Shark, "Scientific name for Nurse Shark is Ginglymostoma cirratum". The Nurse Shark is a large shark, with a flattened body and a wide round shaped head. The Nurse Shark is not harmful but can be very dangerous if provoked. The nurse shark is endowed with very strong jaws and very noticeable barbells between its nostrils that are used to find and taste food.

The Nurse Shark’s fourth and fifth gills are located very close to one another. It has rounded dorsal fins that are almost similar in size. The Nurse Shark utilizes its spiracle to breathe when it is resting at the bottom of the ocean. The spiracle is an organ that is located behind the eyes of the nurse shark.

The Nurse Shark is usually very slow and generally sluggish which is why it spends most of its time resting at the bottom of the ocean.

The Nurse Shark is smooth to the touch and is dark brown or yellowish-brown and younger sharks have tiny dark spots.

The nurse shark is nocturnal. It rests in groups called schools during the day and is active at night. The Nurse Sharks do not get stressed under captivity like some sea creatures do.

This particular species does not migrate and it adapts to very cold conditions by having very reduced activity. Male Nurse Sharks mature at the age of 18 years while females mature at about 20 to 22 years of age.

The sluggish nurse shark is not at all slow when it comes to feeding. The Nurse Shark can capture its prey at amazing speeds. It mostly feeds at night on sea urchins, bony fish, small stingrays and spiny lobster.

You will find nurse sharks in the eastern Pacific Ocean and also in western Atlantic Ocean.

The Nurse Sharks reproduce through aplacental viviparity. This means that fertilization takes place internally and hatching is equally within the mother’s body. The mother can reproduce litters of 20 to 30 pups that resemble the adult in all ways.
There are over 400 types of sharks, Sharks have the most powerful jaws on on earth. Nurse Sharks jaws, both the upper and lower jaws move. Nurse Sharks skin is made of denticles instead of scales like other fish. The denticles are constructed like hard, sharp teeth (tooth-like projection) and this helps to protect the Nurse Shark from being injury. The Nurse Shark is carnivores meaning: an animal that feeds on flesh (Meat).

Search the Web for More information on Nurse Shark at LookSeek.com Search