Back To Category Chemistry
Title : 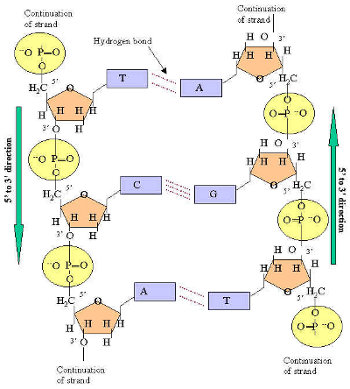 The two types of nucleic acid are, deoxyribonucleic acid (DNA) and ribonucleic acid (RNA), which are polymers made up of monomers called nucleotides. Nucleic acid is found in all living things, and some none living entities, and in all cells with the exception of mature red blood cells. DNA and RNA are examples of polynucleotides with specific biological functions: encoding; transmitting; expressing genetic information. Polynucleotide molecule is a biopolymer composed of 13 or more nucleotide monomers covalently bonded in a chain. DNA and RNA are used in repair, reproduction and protein synthesis. A DNA molecule is a double helix made up of two strands of polymers that are complementary to each other but also not identical. The base pairs of the two strands are held together by hydrogen bonds. RNA is used in directing the production of protein by the cells. Messenger RNA (mRNA) is the type of RNA that contains the information for building proteins. Protein building happens in two steps. First, mRNA carries the information, or message, from the DNA out of the nucleus into the cytoplasm. In the cytoplasm the mRNA interacts with ribosome that reads the sequence of mRNA bases. Each sequence of three bases, or codon, will code for a particular amino acid. Amino acids are the building block of proteins. Transfer RNA (tRNA) assembles the amino acids.

Search the Web for More information on Nucleic Acid at LookSeek.com Search