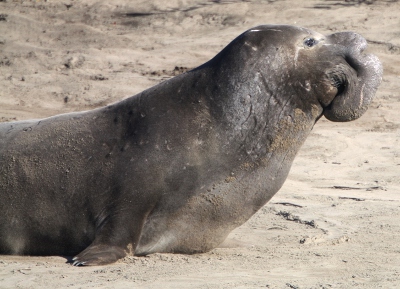 Before molting both adults and young ones have a black skin. However after molting they attain silver to dark gray coat which fades later to brown yellowish. The Northern Elephant Seal have round, large and black eyes. The hind limbs are atrophied and each foot has five long webbed fingers.

Northern Elephant Seals breed in December and January. The bulls are the ones that return to the breeding ground first. They fight with other bulls to determine which ones will get the harem. The fights are normally fierce but no deaths. In case a bull does not get a harem the young incapable bulls are chased away. These bulls are polygamous and depending on the energy the bull has, the male Northern Elephant Seal can have more than 50 females in a season.

The gestation period takes around eleven months and they can have as many as 500 pups. The females fast for more than four weeks taking care of them. The Northern Elephant Seal pups that their mothers die and live them young can be adopted by other females. However, the females can be very aggressive after birth in order to defend their young ones. The unfortunate thing to note is that many pups die as a result of these fights.

Northern elephant seals spend a lot of time underwater. This explains their feeding habit. They are believed to be nocturnal deep feeders and goes as deep as 1000 ft (305 meters) in search of food. The Northern Elephant Seal eat deep water squid, sharks, rays and ratfish. However their main prey is Octopoteuthis deletrod squid. This is according to a research done.

Search the Web for More information on Northern Elephant Seal at LookSeek.com Search