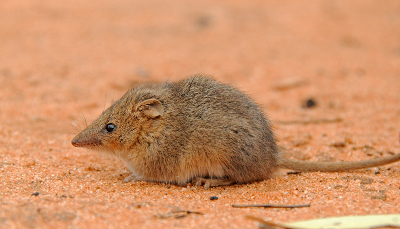 In 1975 Wongai Ningaui and Pilbara ningaui discovered them and they were the last genera of Australian marsupial to be discovered.

The Ningaui weigh around 6.5 to 10.5 grams and the body length is 2 3/8 to 2 3/4 inches (60 to 70 mm). They have a very high resemblance with the small rodents and mice but their snouts are pointed. The Ningaui tails don’t have brush or crest. The size of the tail can either be the same length with the body or shorter.

The Ningaui are nocturnal hunters who feed on insects which are larger than them. These includes; beetles and cockroaches. The Ningaui are very quick when attacking their prey. They subdue them with their ferocious bite around the neck and leave them dead.

Surprisingly the Ningaui don’t breed in their first year despite having a very short lifespan which is 18 to 24 months. Both males and females reach maturity at the age of 6 to 11 months though most of the Ningaui mature at the age of 8 to 10 months. The breeding season takes place in the second year between October and January.

The Ningaui gestation period lasts 14 to 21 days and they give birth to 5 to 7 litters around December. At birth the young ones have functional forelegs, mouth and nostrils. Later the other parts of the body develop in stages.


The female Ningaui are the ones that nurtures their young for a period of 45 days and after that they are left so the mother can go to hunt. The Ningaui are raised in summer when the night temperature is warm and prey is plenty.

Their social behavior is interesting. The Ningaui can travel up to 1.2 miles (2 km) from capture. During winter seasons the food is scarce and the harsh temperature makes them less active. The ovulation in females is induced by seasonal cues like rainfall and day length.

Search the Web for More information on Ningauis at LookSeek.com Search