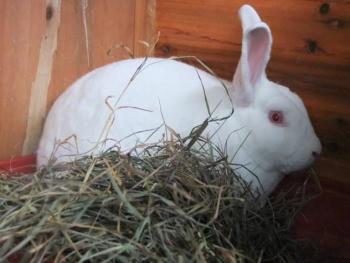 Never pick up the rabbit by the ears. Instead, pick it up by the scruff of the neck and support its weight under the back legs. Picking it up by the ears can rip tissue and damage blood vessels. Rabbits regulate their body heat through their ears.

New Zealand Rabbits have not been bred for companionship like other rabbits. They can be skittish of approaching people or any shadows overhead. Fortunately, New Zealand Rabbits do not bite nearly as much as other breeds. This is in part because any rabbit that did bite would hit the frying ban before breeding.
New Zealand Rabbits are not affectionate toward humans but have good mothering instincts to their own litters.

Rabbits tend to defecate in the same place in the cage. Put urine soaked pellets over a litter box, if the cage has one, to encourage them to urinate and defecate in that location.

Care and Up keep of New Zealand Rabbit

Give New Zealand Rabbits hay to aid in digestion and reduce the risk of fur-balls impeding the digestive tract. Their diet should consist of 70% of Hay and make sure they have fresh water every day. New Zealand Rabbits can receive root vegetables like carrots and parsnips infrequently. Give them rabbit pellets for their daily consumption. Alfalfa provides the high caloric content necessary for baby bunnies development. Once rabbits reach seven months of age, gradually switch them over to timothy hay, oat hay, or orchard grass. If the rabbit is a pet, avoid giving them yard clippings, since grass is often sprayed with fertilizer, insecticides, pesticides, and other chemicals rabbits should not be eating. You can give it rabbit-safe chew toys or wooden blocks to gnaw on. Even if the rabbit is kept for meat, give it something safe to gnaw on; their front teeth grow up to five inches (12.7 cm) a year.

The New Zealand White Rabbit tends to take longer to start milk production than some other rabbits. Add calf mana to the mother’s diet to improve milk production. De-worm the rabbits once a month.

The Czech Red Rabbit is descended from the Red New Zealand rabbit.

If someone mentions hasenpfeffer (rabbit stew), the New Zealand Rabbit has a good chance of being on the menu; it is one of the most common meat rabbits in the world.

Pet New Zealand Rabbits should be kept in pairs for Companionship, its important for a rabbits happiness and it can live longer with a companion. In the wild, rabbits are very social.

Search the Web for More information on New Zealand Rabbit at LookSeek.com Search