Back To Category Eagles-Hawks-Kites
Title : 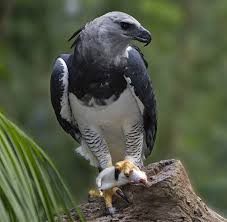 The New world hawk-eagle birds are forest birds which have various species originating from the highland woodlands. Some of the birds species includes the large and small birds which have variable morphology based on their feeding habits and strongly hooked bills like the Black Hawk-eagle, Black and white Hawk- Eagle, Black and chestnut Eagle and the Ornate Hawk-eagle

The New world hawk-eagle birds expresses a diverse variation in body shape and sizes depending on the regions of existence. Various species expresses a head crest with a large to medium-sized slender shaped body developing to lengths of about twenty three to thirty inches (58.4 to 76.2 cm) with weights of about 31.7 to 45.8 ounces (900 to 1300 grams) and a long tail.

Both the males and the female New world hawk-eagle birds are equally clustered with average raptor brown upper parts and pale underneath with varying patterns on the body and wings. In addition, are white colored dots in some parts of the body. However, the younger New world hawk-eagle birds usually have a whiter head, a distinguishable characteristic from the adult birds.

According to Ridgely and Greenfield 2001, and based on Hitly’s book of 2003, the bird often soars to immense heights. It can do this either in pairs or singly. This is said by most scientists to be a territorial strategy that helps it protect its niche from other species. The New world hawk-eagle birds often perches on top of trees, but it rarely does this in open.

The New world hawk-eagle birds usually build stick nest on trees and feed on various prey items including insects and small-sized mammals in including reptiles and birds. Some of the birds feed on carrions and a few on fruits.