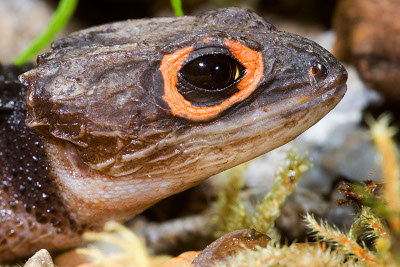 The New Guinea crocodile skink can be traced to be a native of southeastern Asia but due to actions and explorations of humankind, it has now been spread to other parts of the world including northern Irian jaya, Northern Papua New Guinea, and Karkar Island. It can also be found in parts of Indonesia Island and Solomon islands.

The New Guinea crocodile skink are sexually active after three to four years after reaching maturity. New Guinea crocodile skinks to be selected for reproductive purposes are identified by an orange coloration under their chins. Females lay eggs just one at a time and they are capable of laying a maximum of six eggs if nutrients are enough. The reason behind this is that the left oviduct and the ovary develop slowly in comparison to the right. The effect is that, the egg in the left ovary is laid after 60 days after the right ovary’s egg has been laid. Only one live offspring can be given birth by a female crocodile skink.

The New Guinea crocodile skink is a carnivore preying on insects and arthropods for example earthworms, darkling beetles, and silkworms. Vitamin D3 as well as calcium should be supplemented in the diet for proper growth of juveniles and hatchlings.