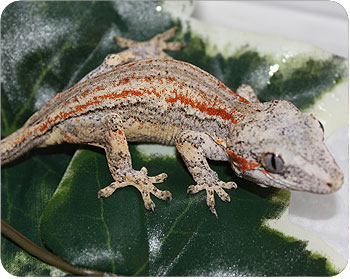 There coloration thus merges with the olive green, pale brown color of barks. New Caledonian Giant Geckos mostly keep away from predators by shedding its tail when threatened, which doesn't grow back during its lifetime. The capillaries found in the tail close immediately preventing the reptile from losing blood. It is also understood that their nocturnal nature helps them evade their predators.

New New Caledonian Giant Geckos will grow breeding size after four-five years and can reach a height of 14 inches (36 cm). The eyes do not have eyelids and thus their long tongues act as structures that remove dirt-like materials and to give a moisturizing effect to the eyes to prevent them from drying. Above the eyes, the New Caledonian Giant Gecko has structures that resemble hairs.