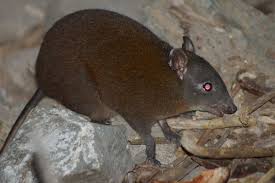 Facts about Musky rat kangaroo. Scientific name for Musky rat kangaroo is Hypsiprymnodon moschatus". Musky rat kangaroo is a marsupial and belongs to the Family Macropod. This means it has big feet. They show some primitive ancestral characteristics like trapping the grasses and sticks for making nests. They also possess a simpler stomach that digests a richer diet. Their forelimbs and hindlimbs are almost equal in size alike the kangaroos and wallabies from the family.

They are buck toothed. Their second and third canine is quite smaller than the first one. The Musky Rat-Kangaroos have intact skulls, just like rats. They are found in a very limited region in the tropical rainforests of Australia. However, Musky Rat-Kangaroo is facing extinction as a large part of its habitation is consumed by the economically booming tropical human civilization. Reintroduction of the species to other tropical rainforests of Australia is under progress, but the population of the species doesn’t seem to recover.

Musky Rat-Kangaroos are named after their high rump and musky body odour.

Best Place to Visit Musky rat kangaroo is Crater Lakes National Park, Queenland The animal is seen walking around the lakes searching for food and enjoying its slow movement within the bushy areas.

The Musky rat kangaroo weigh as low as 1.1 to 1.5 pounds (0.5 to 0.7 Kg). As the Musky rat kangaroos fore and hind limbs are equal in size it is often seen bounding and running with help of all four limbs rather than just hopping. The first digit (toe) of its hind foot is present (which is absent in all other members of the family) and functional too (but there is no claw). Whole body is covered with dark brown fur. A little distribution of white fur around the neck might be observed.

Musky rat kangaroo is frugivorous (fruit eating) which makes them stay in the branches of the trees at times. Presence of the first digit in their hind limb
makes them capable of climbing trees.

The Musky rat kangaroo can give birth to 1-3 young babies in a single liter. Males become more aggressive in the breeding season. Sometimes the competition between the males may be resource biased, also over fruit.

Search the Web for More information on Musky Rat-Kangaroo at LookSeek.com Search