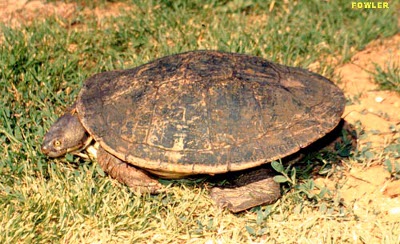 The Macquarie turtle usually folds its neck in a backward motion and hides itself in the shell whenever it spots danger. These turtles do not have an outer ear system but they have an inner ear complex with a set of auditory nerves that enable them to centralize the hearing function.

Murray River Turtles are usually found on the southern part of the equator together with other side-neck turtles. They inhabit fresh water ecosystems such as lakes and large rivers. For many years, the Murray River Turtles have been popularized as pets and their hatchlings are usually sold as penny turtles but gradually grow into large and mature adults. The formation of the shell is dependent on the diet and the environment in which they are bred. In the event of inadequate house or insufficient diet, the Murray River Turtles can suffer from deformed shells. Some turtle owners usually damp them in rivers and ponds as they grow making them one of the most common sights in lakes, ponds and urban parks.

The Murray River Turtles bred in spring and summer laying their eggs in burrows near rivers and lakes. The eggs take about 80 days to hatch. In the wild, the newly hatched turtles face the threat of predators such as wild pigs, cats, foxes, birds, rats and goannas. The adult however have a few enemies.

When on land, the Murray River Turtles use their sense of smell to find food. While on water on the other hand, they use their barbels that contain olfactory nerve endings to enable them to find food even in muddy and dark waters.

Search the Web for More information on Murray River Turtle at LookSeek.com Search