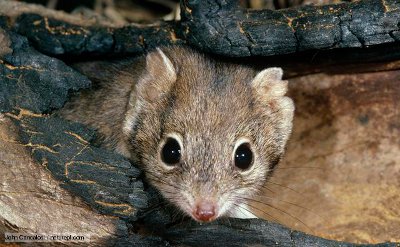 Facts about Mulgara "Scientific name for Mulgara Marsupialis Dasycercus cristicauda". Mulgaras are the only two species of the genus Dasycercus which means hairy tail. They are species that are very similar in nature. They are the Bush tailed mulgaras and Crest tailed mulgaras. Identifying them has been so hard until recently after several biological tests. Mulgara belongs in the family of Carnivorous Marsupials

Mulgaras are small with a fine soft fur which is light sandy-brown. The upper parts are dark grey and the under parts are grayish white.

Mulgaras tails are short at around (7 to 13 cm) and reddish in color with black hair near the tip. This is where they get their common name from. Ears are thin and eyes are large.

The Mulgara are closely related to the Tasmanian devil and quolls. The mulgaras live in deserts and spinifex bush in central Australia where there are widely distributed.

Mulgaras are nocturnal and around 4 3/4 to 8 5/8 inches (12.5 to 22 cm) long. They dwell in short burrows where they occasionally sunbathe in the entrance.

An amazing fact to note is that they have kidneys that are developed to excrete concentrated urine to preserve water as they don’t drink water. The mulgaras feed on newborn snakes, insects and lizards.

The Marsupial breeding occurs between June and September where they give birth to six or seven young mulgaras.

Mulgaras social behavior is not well known according to the researchers.

Search the Web for More information on Mulgara at LookSeek.com Search