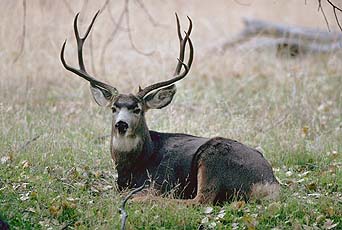 Facts about Mule Deer, "Scientific name for Mule Deer is Odocoileus hemionus". The Mule Deer is an Odocoileus type of deer that comes from the Cervidae family. The Mule Deer are native to the western part of North America, and they attain their name as their large ears resemble that of the mule. There are supposed to be more than a few subspecies, as well as the black-tailed deer. However, some hereditary studies have shown that Mule Deer might have developed relatively freshly in the course of the interbreeding of black-tailed and white-tailed deer. Generally, Mule Deer are more connected with the western land of the Missouri River, and more particularly in the Rocky Mountain area of North America. The Mule Deer can also largely found in Argentina.

Mule Deer have a brownish-gray color body, with a white color leftover patch and a tiny white color tail with a black color tip. The length of the tail of the Mule Deer ranges from 5 inches (12.7 centimeters) to 8 inches (20.32 centimeters). Generally, Mule deer are effortless to identify, owing to their big mule-like ears, which occupy 3/4th of the length of their head. Usually, the Mule Deer have a unique black-colored forehead, or cover, which contrasts sharply with a light grey-colored face. The light colored face of the Mule Deer makes the muzzle markings and eye rings appear less obvious.

As the eyes of the Mule Deer are situated on the sides of their head, they can have a vision of 310 degrees around themselves. The Mule Deer have a more enhanced nighttime vision than humans, but less precise color and daytime vision. The Mule Deer can detect even a slight movement of a predator equal to 600 meters (1968 feet) away from them, but they are not extremely good at detecting stationary forms. The sense of smell of the Mule Deer is equal to 1,000 times stronger than that of human beings. A mule deer can sense the human smell at equal to a half mile away. They can sense water that is equal to two feet beneath the ground.

The digestive tracts of a Mule Deer differ from elk and cattle in that they have a minor rumen with respect to the size of their body. So, the Mule Deer will be choosier in their feeding. Instead of consuming huge quantities of low-quality diet, such as grass, they will choose the most healthy plants and plant parts. Mule deer are chiefly browsers, and they mostly feed on forbs, leaves and twigs of forested shrubs.

Besides movements associated with available food and shelter, the breeding cycle of the Mule Deer is vital in understanding their behavior. Their mating season usually commences in the fall as the female Mule Deer goes into estrus for some days and the male Mule Deer become more violent, challenging for mates. Females may mate with more than one male Mule Deer and return to estrus in a month if they do not reconcile. Usually, the gestation period ranges from 190 days to 200 days, with fawns born during the spring, continuing with their mothers during the summer season and being nursed in the fall following about 60 days to 75 days. Usually, female Mule Deer offer birth to two fawns in each breeding cycle.

The average lifespan of the Mule Deer ranges from 9 years to 11 years.

Search the Web for More information on Mule Deer at LookSeek.com Search