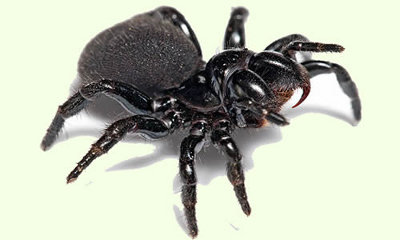 They rear up in a manner similar to funnel web spiders when provoked or dug up.
The Mouse Spider digs a burrow before covering it with a trap door, which they sometimes further camouflage with leaves or debris. The burrow door protects them from predators and extreme temperatures. The Mouse Spider weaves a silken thread to make a hinge for the door. They remove the burrow door before waiting for prey to wander past. The average size of the "silk lined burrow" is from 8 to 22 inches (20.3 to 55.9 cm) deep and the widest spot is at the bottom of the burrow and the entrance area. They have a side room that extends off the main burrow and they usually close it with a trapdoor. This is where the Mouse Spider stores its eggs for safety. The most unusual feature of the burrow are the two trapdoors on the top surface, that are at almost at right angles to each other. The Mouse Spider waits for the food to walk by and ambushes it from the trapdoor in safety.

Some of their pray is other spiders, beetles, ants, frogs and small lizards. Most male mygalomorph spiders (meaning-a large spider of a group that includes the funnel-web and tarantulas spiders) roam at night in search of a female during the mating season. This way the Mouse Spider can avoid the heat and predictors. Not much is known about the Eastern Mouse Spider in the forests.

They mostly eat other insects but will eat anything else they can catch.
Female Mouse Spider grow up to an inch and a half long (3.8 cm). Females are dark brown or black. Male Mouse Spider are about an inch long (2.5 cm). All have very distinctive curved high head and jaw regions. Their casing is bright and smooth. The Mouse Spider eyes are distributed across the front of the casing, not close but grouped. Males have longer legs and palps near the mouth that can be mistaken for an extra pair of legs. The Mouse Spider has large stocky legs. Mouse Spiders have two spinners that protrude from their rears, rather like spikes. Both males and females have these spinners.

There are several species of Mouse Spiders. Missulena occatoria or red headed Mouse Spiders have a red head, hence the name; this species mostly lives in the west. The Mouse Spider also have a blue abdomen. Missulena bradleyi and Misuulena pruinosa have white or grey patches on their abdomens. The Mouse Spider species live in the north and east of the continent. The casing for all three species is shiny.
Female Mouse spiders live for several years, even over a decade. Male Mouse Spiders leave their burrows at maturity to seek a mate. The male dies after mating.
An pathological or abnormal fear of spiders is "arachnophobia".

Spiders belong to a group of animals called "arachnids", mites and Scorpions and a tick is also in the arachnid family. An Arachnids is a creature with eight legs, two body parts, no antennae or wings and are not able to chew on food. Mouse Spiders are not insects because insects have three main body parts and six legs and most insects have wings.

Mouse Spiders have oversize brains.
In the Mouse Spider the oxygen is bound to "hemocyanin" a copper-based protein that turns their blood blue, a molecule that contains copper rather than iron. Iron-based hemoglobin in red blood cells turns the blood red

The muscles in a Mouse Spiders legs pull them inward, but the spider can't extend its legs outward. It will pump a watery liquid into its legs that pushes them out. A Mouse Spider’s legs and body are covered with lots of hair and these hairs are water-repellent, which trap a thin layer of air around the body so the Mouse Spiders body doesn't get wet. It allows them to float, this is how some spiders can survive under water for hours. A Mouse Spider feels its prey with chemo sensitive hairs on its legs and than feels if the prey is edible. The leg hair picks up smells and vibrations from the air. There are at minimum, two small claws that are at the end of the legs. Each spiders leg has six joints, giving the Mouse Spider 48 leg joints. The Mouse Spider’s body has oil on it, so the spider doesn't stick to it’s own web.

A Mouse Spiders stomach can only take liquids, so a spider needs to liquefy their food before they eat. They bite on their prey and empty its stomach liquids into the pray which turns it into a soup for them to drink.

A male Mouse Spider has two appendages called "pedipalps" a sensory organ, instead of a penis, which is filled with sperm and insert by the male into the female Mouse Spider’s reproductive opening.

Mouse Spiders do not have a skeletons. They have a hard outer shell called an exoskeleton-(a rigid external covering for the body in some invertebrate animals). The exoskeleton is hard, so it can’t grow with the spider. The young Mouse Spiders need to shed their exoskeleton. The Mouse Spider has to climb out of the old shell through the cephalothorax. Once out, they must spread themselves out before the new exoskeleton will harden. Know they have some room to grow. They stop growing once they fill this shell. Females spiders are usually bigger than males.

Search the Web for More information on Mouse Spider at LookSeek.com Search